Park and Xi put pressure on the North in Beijing

Park and Xi put pressure on the North in Beijing 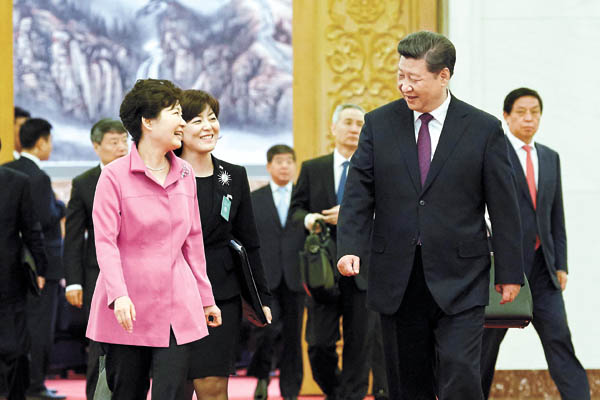 Chinese President Xi Jinping, right, and South Korean President Park Geun-hye walk into a luncheon at the Great Hall of the People in Beijing on Wednesday after they had a bilateral summit meeting. [Joint Press Corps]

BEIJING - South Korea and China exerted pressure on the North to abandon its nuclear arms and stop provocative actions, such as nuclear and missile tests, in a coordinated warning from a presidential summit Wednesday.

President Park Geun-hye and Chinese President Xi Jinping held a summit at the Great Hall of the People on Wednesday. Park arrived in Beijing in the morning for a three-day trip to attend lavish events hosted by the Chinese government to mark the 70th anniversary of the end of World War II.

The summit was the first item on her itinerary.

North Korea’s ruler Kim Jong-un will not attend the Beijing events. The communist regime is represented by Choe Ryong-hae, a senior official said. 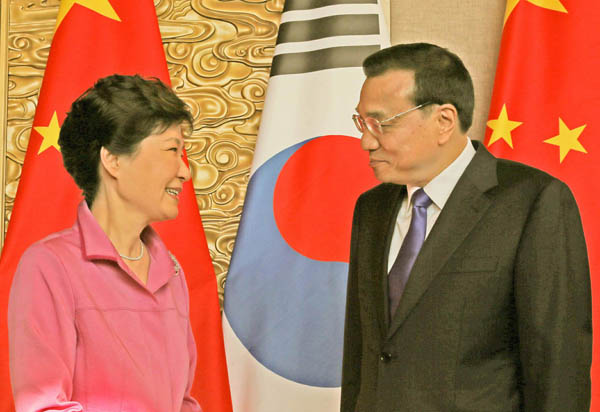 Korean affairs, including the latest tensions between the two Koreas, were addressed in detail during the Park-Xi summit. The two leaders said it was noteworthy that the crisis was resolved through an inter-Korean agreement, adding that the deal should be fully implemented.

Top security officials from Seoul and Pyongyang reached a deal at the end of last month after tensions rose to a worrying degree following land mine blasts in the demilitarized zone that maimed two South Korean soldiers. They, however, are still bickering over how to interpret the deal.

“As strategic cooperative partners, the two sides agreed to improve their communication and consultations on regional and international issues, including Korean Peninsula affairs,” the Blue House said.

In her opening remarks, Park expressed appreciation for China’s “constructive” role and close communication with South Korea to resolve the latest crisis.

“The recent provocation by the North inside the DMZ demonstrated the reality of the Korean Peninsula’s security and that tensions can escalate at any time,” Park told Xi. “It also showed the desperate need for peace on the peninsula.

“It also showed the importance of strategic cooperation between Korea and China and unification of the Korean Peninsula to achieve peace in the region,” Park added. “I appreciate China’s close communication with us and its constructive role to resolve recent tensions on the peninsula, and I hope to have a candid discussion with President Xi about Korean Peninsula affairs of today under continuing tensions.”

Speculation has been high that China exerted pressure on the North when tensions rose, but no specifics have been made public about its role.

North Korea also faced a renewed warning from Park and Xi to not engage in brinkmanship with its nuclear and missile programs.

“The two sides stressed that the Sept. 19 Joint Declaration of the six-party talks and resolutions of the United Nations Security Council must be implemented fully,” the Blue House said. “They also expressed the stances that they oppose to any action that escalates tensions in that regard.”

The joint declaration, agreed during the fourth round of the now-stalled six-nation talks in 2005, said the North will dismantle all its nuclear weapons facilities and return to the non-proliferation treaty and international nuclear oversight. UN sanctions were imposed over the past years after three nuclear tests by Pyongyang and a series of long-range missile tests.

“The two sides reaffirmed the goal of denuclearization, which has been declared several times in the past,” the Blue House said. “Paying attention to the recent Iranian nuclear deal achieved through the international community’s united effort, they agreed that a meaningful six-party negotiation must be resumed as soon as possible.”

During the summit, Park and Xi also agreed that the cooperation between Seoul, Beijing and Tokyo are crucial to maintain peace, stability and prosperity in Northeast Asia and a trilateral summit should be held at a convenient time, possible in late October or early November. The last trilateral summit was held in 2012.

Other bilateral issues were also discussed during their summit and a special luncheon. The Park-Xi summit was the leaders’ sixth, and it lasted about 34 minutes. Following the meeting, the two leaders had a luncheon for 64 minutes.

In opening remarks, Park stressed the significance of the timing of the summit.

“We had several summits, but today’s summit is particularly meaningful because it takes place in the historic year that marks the 70th anniversary of the end of the World War II, the 70th anniversary of Korea’s liberation and also national division,” Park told Xi. “The history of the two countries, which endured hardships together over the past century, is a precious cornerstone for today’s friendship. I hope the two countries will continue cooperation in the various challenges ahead of us.”

Before Park’s opening remarks, Xi noted that the two leaders accomplished a series of important mutual goals through their reciprocal visits. He thanked Park for accepting the invitation to attend Beijing’s commemoration of what it calls the “70th anniversary of victory in the Chinese People’s War of Resistance Against Japanese Aggression and the World Anti-Fascist War.” A series of lavish events, including a controversial military parade, will take place today, and Park will attend all of them.

“I am happy to see that Korea-China relations are progressing forward in the fields of mutual political trust, economic and trade cooperation and people’s exchanges at the same time,” Xi said.

The two sides also agreed that Park’s “Eurasia Initiative,” aimed at boosting the regional economy through free trade and economic cooperation by reconnecting the railways that link both Koreas, China, Russia and eventually Europe, and China’s “One Belt, One Road” policy, also known as the New Silk Road Initiative, share some common links and promised to work together to realize them.

Although the Park-Xi summit took little more than half an hour, the two leaders had more opportunity to have a candid dialogue during a special luncheon, the Blue House said.

Xi’s hosting of a luncheon for Park after the summit was special treatment, according to the Blue House, as no such event is scheduled for other world leaders attending the commemoration events. “It also reconfirmed the ever-growing strategic cooperative partnership between the two countries,” the Blue House said.

Park’s spokesman, Min Kyung-wook, said the two leaders exchanged their remarks during the summit and luncheon through simultaneous interpreters in order to maximize their discussion time. “The mood was great and friendly,” Min said.

Later in the day, Park attended another meeting with Chinese Premier Li Keqiang and discussed a series of economic issues, particularly the expected benefit from the Korea-China Free Trade Agreement (FTA). The trade pact, wrapped up in June, will take effect after the two countries’ legislatures ratify it.

The Blue House said the FTA, once it takes effect, will allow Korea to aggressively enter the rapidly growing consumer market of China. The Chinese market is expected to grow to $10 trillion by 2020 based on Beijing’s policy of shifting emphasis from exports to domestic consumption, the Blue House said.

Park also proposed a plan to integrate the cultural markets of Korea and China through joint production and distribution of broadcasting content. The Korea Venture Investment Corporation and China Development Bank Capital Corporation will jointly create 200 billion won ($170 million) worth of funds to make investments.