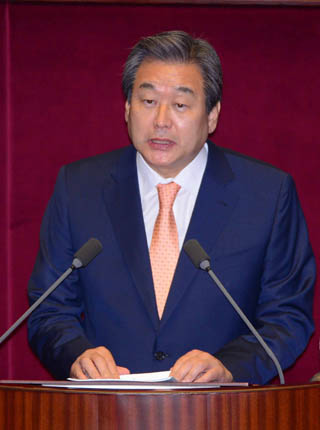 Ruling Saenuri Party Chairman Kim Moo-sung said that reforming what he called the country’s rigid labor market was essential to creating more jobs for young job seekers and saving the country from falling into the economic stagnation that had befallen Japan decades ago.

Standing before fellow lawmakers at the National Assembly on Wednesday, the chief of the ruling party said that the time had come for the country to overhaul the labor market so it could fix the “rigid employment system to create more jobs” for the young.

“The ultimate purpose of labor market reform is to construct a new system that would create more jobs, especially for young people. Through the reform, we could lower labor costs for companies to boost their investment,” Kim said on behalf of the ruling party to mark the start of the last regular session in the 19th National Assembly.

“Job creation means economic growth. Job creation is more welfare and hope [for the country],” he emphasized, promising that the Saenuri’s policy priority would from now on be centered upon job creation.

Kim’s emphasis on reforms echoed President Park Geun-hye’s repeated calls for the legislature to pass labor reform bills that would invite new changes like a peak wage system. Under the peak wage system, those nearing retirement would receive a gradual reduction in salary each year in return for job security until retirement. The government argues companies can use the money saved to hire more entry-level employees.

The Saenuri leader went on to add that the time has come for the country to transform the seniority-based pay system, which has been in place for up to 40 years, into a performance-based system, which he said was more “advanced.”

Kim’s calls for labor reform come as Asia’s fourth-largest economy has seen itself mired in economic stagnation. According to the Bank of Korea, this year’s economic growth is projected to be just 2.8 percent.

The ruling party chairman also touched on Korea’s low birth rate, which stood at 1.21 on average per woman last year. He noted that the birth remained low despite the government pouring 8 trillion won ($6.7 billion) over the past 10 years in policies aimed at encouraging family.

The key to having more babies, Kim said, was to create more jobs for would-be parents so that they felt financially secure enough to have children.

He also took aim at corporate labor unions for promoting their own self-interests with a combative approach and promised to keep an eye on Korea’s major conglomerates, saying that unfair business practices by family-owned business groups should never be overlooked.

Kim additionally proposed talks with his opposition counterpart Moon Jae-in to push for the introduction of a primary nomination system in the general elections next year.