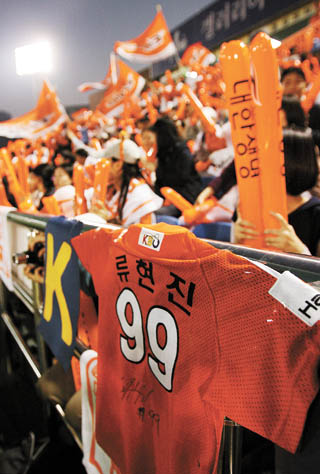 Fans of the Hanwha Eagles hung Ryu Hyun-jin’s jersey on the stand in the KBO League game. [JoongAng Ilbo]

Most baseball clubs honor longtime players by retiring their uniform number when they leave the league. But these days, clubs are also unofficially retiring star players’ numbers when they move to leagues in other countries such as the United States and Japan.

Most recently, SK Wyverns catcher Park Kyung-oan became the 12th player to have his number retired by his club. The 43-year-old left the team last year to coach the Wyverns’ minor squad and took with him No. 28.

The first player to have his number retired was catcher Kim Young-shin of the OB Bears (now the Doosan Bears), who died in a car accident in 1986.

However, as more star players move from the Korean Baseball Organization (KBO) to overseas leagues, other players are not adopting the leaving player’s name out of respect and to allow him to maintain a connection with the team.

Los Angeles Dodgers pitcher Ryu Hyun-jin wore No. 99 for the Hanhwa Eagles after joining the team in 2006. Since he moved to the Dodgers in 2012, no Eagles player has tried to take the number.

“I am forever an Eagle,” Ryu said before he left the Eagles to join the Dodgers. “I hope No. 99 won’t be worn by anyone until I return.”

In the Nexen Heroes, no one is wearing No. 16, which was used by the Pittsburgh Pirates’ Kang Jung-ho.

Kim Ha-seong, who succeeded Kang’s shortstop position, considered taking Kang’s number, but the club decided to hold the number until Kang returns from the United States. Kim, 19, wore the No. 0 jersey but recently changed to No. 7, which many shortstops in the KBO prefer to wear.

For the Samsung Lions, the No. 21 jersey is temporarily frozen because of Oh Seung-hwan, who left for the Hanshin Tigers in Nippon Professional Baseball (NPB).

In Japan, the 33-year-old closer is wearing the No. 22 jersey, which was previously worn by the club’s legendary closer Kyuji Fujikawa.

Veteran Lions slugger Lee Seung-yuop is a player who retrieved No. 36 after coming back to the KBO from the NPB. After he left the KBO to play for the NPB’s Chiba Lotte Marines in 2004, no one in the Lions appeared with No. 36 on their jersey.

“In both cases, [not using a specific number] wasn’t the official decision from the club,” the Lions’ public relations officer Kim Nam-hyeong said. “But players just decided not to use the number in order to respect them.”

Until the mid-2000s, KBO clubs were not inclined to re-designate a number used by former star players.

In 2007, Kia Tigers pitcher Kim Jin-woo received a uniform marked No. 18, which was used by the team’s legendary pitcher Sun Dong-yol. After facing harsh opposition from fans, Kim chose a different number.

Koo Dae-sung, who had 214 saves for 13 seasons with the Eagles, did not get the honor from the team either, as the Daejeon-based club gave his No. 15 jersey to rookie Yoo Chang-sik in 2010.

Certain uniform numbers are preferred by each position. No. 7 is often given to shortstops. In KBO history, legendary shortstops have performed with No. 7 on their jersey.

Former LG Twins manager Kim Jae-bak is considered to be the first legendary shortstop in the KBO to make the No. 7 jersey famous. He is followed by the Kia Tigers’ Lee Jong-bum and the SK Wyverns’ Park Jin-man. For Lee, the Tigers have retired his No. 7 jersey.

“I wore No. 7 because I wanted to be like Kim Jae-bak,” Lee said. “I’m happy that many young players succeeded with that number.”

Catchers tend to prefer No. 2, 12 and 22, as the number two is associated in scoring putouts. Left-handed pitchers often wear No. 47 and No. 10 jerseys, frequently used by power hitters.

Managers also have preferred numbers. NC Dinos manager Kim Kyung-moon wore the No. 74 jersey, with the seven standing for luck and the four meaning death, because in Chinese, the number is nearly homophonous with the word for death.

Kim says he chose the number because just like in life, there are elements of luck and death in baseball.