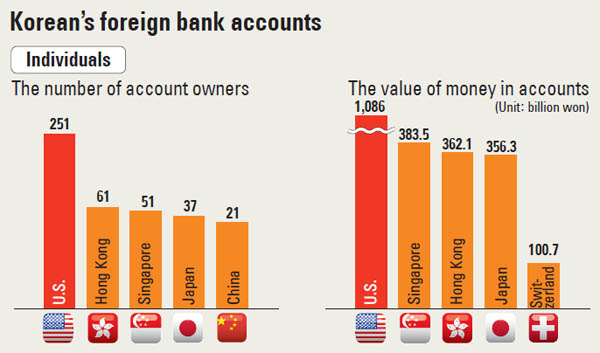 More Koreans have reported their foreign bank accounts this year, as the government has warned of increased penalties on undeclared offshore
balances.

The aggregate amount of money divulged in foreign bank accounts and exceeding 1 billion won ($840,000) on any last day of the month in 2014 stood at 36.9 trillion won, surging 52.1 percent year-on-year, the National Tax Service (NTS) said on Thursday, based on reports submitted in June this year.

The number of taxpayers, individuals or institutions who filed the reports also rose 6.7 percent to 826 this year, the NTS said.

Since the government adopted the regulation in 2011 requiring individuals and institutions to declare a foreign bank account exceeding 1 billion won, a total of 155 taxpayers have been caught attempting to evade the duty and fined a total of 50.8 billion won in penalties. 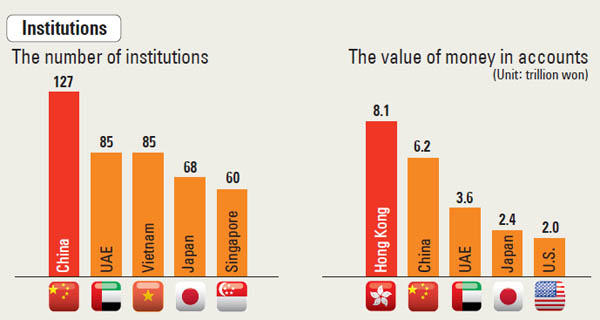 “Starting this year, the government doubled penalties on undeclared accounts from 10 percent to 20 percent if the owner doesn’t present the clear reason why he or she didn’t file the report,” an NTS official said. “Next year, the penalty will double again to 40 percent maximum if the owner doesn’t file a declaration and give a reason at the same time.”

Failure to declare an account exceeding 5 billion won will send the owner to prison for a maximum of two years, and his or her name will be published, according to the NTS.

The NTS will offer a reward up to 2 billion won for anyone who provides information to authorities about a taxpayer evading the regulation.

Nearly half of the foreign bank accounts held by 412 individuals were in the United States, adding up to roughly 1 trillion won out of 2.7 trillion won of the aggregate amount of money held by individuals.

Each individual held an average of 6.5 billion won in his or her accounts.

Since 2010, the NTS has discovered a total of 890 cases of tax evasion on foreign incomes and imposed about 4.5 trillion won of penalties in total, but they have collected only 68 percent of the penalties so far, a ruling party lawmaker said Thursday.

Rep. Lee Man-woo from the Saenuri Party distributed a report to journalists based on data he requested from the NTS, saying the authorities have collected only 3.9 trillion won so far.

The remaining penalties, about 600 billion won, were unpaid because taxpayers protested the levy and took legal steps, such as filing a lawsuit, Lee said.

“Last year only, there were 37 cases out of 226 in which the NTS levied penalties for tax evasion on offshore incomes,” Lee said in the report.

“If they just impose taxes and fail to collect them, tax revenues will never rise. The NTS needs more specialization in investigating offshore tax
evasion.”