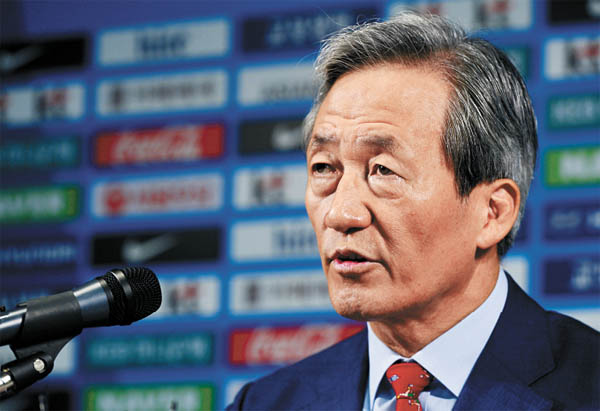 At a press conference at the Korea Football Association (KFA) in Seoul, Chung said that the Asian football governing body sent letters to most of its members, but not to South Korea or Jordan. Jordan’s Prince Ali bin Hussein is also considered a possible candidate to replace current FIFA President Sepp Blatter.

“This is an obvious case of election fraud,” Chung said.

Chung, a former FIFA vice president, emphasized that these letters threatened to “undermine the fairness” of an election to be held next Feb. 26 to choose a new head of the world’s top football governing body. Blatter said he will keep the job until then despite a recent corruption scandal that is still being investigated by U.S. and Swiss authorities.

The letter revealed by Chung is a form letter of support for Platini addressed to FIFA’s secretary general Jerome Valcke. Each individual country is supposed to fill out the letter and send it to Valcke. The letter is titled, “Proposal and support of the candidature of Mr. MP [Michel Platini] for the office of FIFA President.”

It goes on to read: “[Insert name association] is very happy to officially support the candidature of Mr. ....., President of UEFA, for the office of FIFA President, to be elected at the next FIFA Extraordinary Congress 2016 … Finally, just for good order, we wish to confirm that the [Insert name association] is supporting only Mr. MP and, accordingly, we did not sign any other declaration of support for another candidate for the office of FIFA President.”

Chung claimed that the AFC’s Department of Member Associations and Development has made phone calls to individual associations to check whether they completed their forms and sent them to FIFA.

The former KFA president said the letter violates FIFA Statutes of Article 24.1 and 17.1, which state “only the members may propose candidature for the office of FIFA president” and “each member shall manage its affairs independently and with no influence from third parties.”

In the FIFA presidential election, all 209 members have a right to vote. There are 46 members listed in the AFC and 53 members in the CAF.

“Given that the confederations have tremendous influence over their member associations in organizing football tournaments and through administrative oversight, it is clear that the fairness of the FIFA presidential election has been seriously compromised,” Chung said.

Chung, a former lawmaker who also ran for the Korean presidency, said that his side sent a letter on Aug. 31 to FIFA’s Ad-hoc Electoral Committee and its Ethics Committee demanding they immediately investigate the incident and the actions of AFC president Sheikh Salman bin Ebrahim Al Khalifa and UEFA president Platini.

Chung asked the 63-year-old Platini to react to the charge since he is the “largest beneficiary” if the letter scheme worked.

Chung, who previously called Platini a “protege” of Blatter, said he is not satisfied with the situation.

“It’s a pity that FIFA didn’t recognize this problem,” he said. “I don’t know if it’s because Platini is so popular or if he ignores the election process, but things that shouldn’t be happening are continuing.”