LG U+ collaborating with Samsung on smart home

LG U+ collaborating with Samsung on smart home 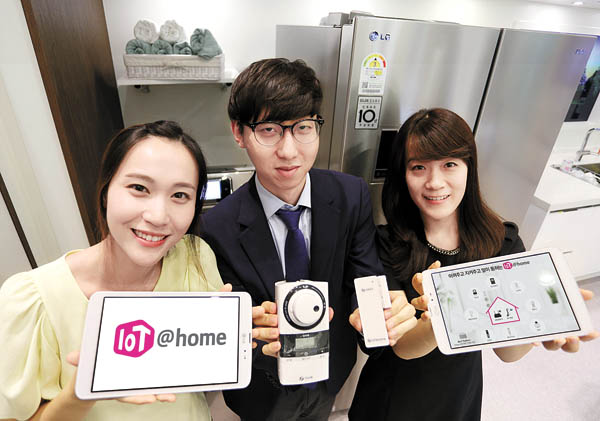 LG U+ employees display different features of the company’s IoT@Home system. LG U+ will collaborate with Samsung Electronics to broaden the range of connected home appliances to include refrigerators and air conditioners. Provided by the company

Mobile carrier LG U+ has added Samsung Electronics to its list of partners for its smart home service, the company said Thursday.

The company has already agreed to work with LG Electronics on its IoT@Home system, which first launched in July and received 10,000 subscribers in its first three weeks.

Smart home platforms allow users to control features of their home, such as door locks, ovens and energy meters, through their smartphone or tablet.

The latest collaboration will extend the range of connected devices within the LG U+ system to refrigerators, washing machines and air conditioners.

“We aim to deliver value for customers through different partnerships with manufacturers both at home and abroad,” said Kim Shi-young, head of the home IoT service division of LG U+. “We expect the platform will make the lifestyle of customers more convenient and safe.”

LG U+ forged a partnership with Kiturami Boiler, one of the largest boiler manufacturers in the country, to integrate heating systems into its service earlier this week.

LG U+ Vice Chairman Lee Sang-chul has emphasized the significant opportunities that lie in Internet-connected home appliances and promised aggressive investment in the emerging market.

He visited the Mobile World Congress in Barcelona, Spain, earlier this year, where the telecommunications company unveiled a series of new devices.

Lee made it clear there that the fate of LG U+ depends on how the company incorporates the Internet of Things (IoT) into its products and business strategies. IoT, one of the buzz words in the tech industry, refers to a network of physical objects connected to the Internet.

The partnership with Samsung Electronics is also the latest of the carrier’s efforts to broaden partnerships beyond its affiliate LG Electronics.

In June, Samsung Electronics announced it will partner with LG U+ to develop 5G network technology. Under the agreement, the two companies will collaborate on research and development for the creation of the 5G standard.