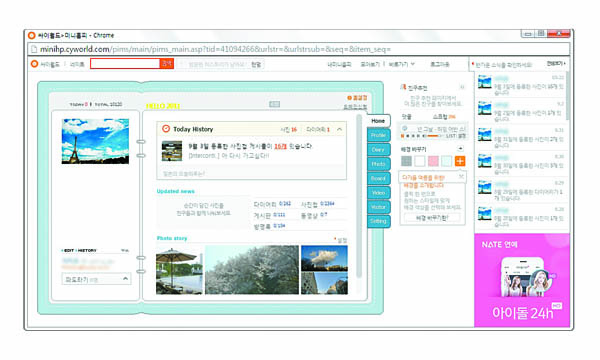 A screen capture of Cyworld, which used to be the most popular social media site in Korea.

Before Facebook emerged in 2004, the dominant social networking service in Korea was Cyworld.

By 2006, one-fourth of the Korean population was active on the site, which allows users to upload photos and blog posts.

Cyworld was acquired in 2003 by SK Communications, a subsidiary of top mobile service provider SK Telecom. But now, the site has a new owner.

Last Friday, SK Planet agreed to sell a 51 percent stake of SK Communications to iHQ, a Kosdaq-listed entertainment agency and media content provider, in exchange for 28.5 percent of the new shares issued by iHQ.

The deal makes SK Communications the second-largest shareholder of iHQ.

In exchange, iHQ effectively becomes the new owner of Cyworld.

Following the stock transactions scheduled for completion in mid-October, SK Planet’s share of SK Communications will fall from 64.5 percent to 13.6 percent.

“We will expand the conversion business model between media content and new media platform,” said Jeon Yong-joo, CEO of iHQ.

“iHQ is now equipped with the foundation for growth in content production and the media business based on its comprehensive distribution network.”

In addition to managing entertainers including actors and singers, iHQ produces dramas and films and also runs a cable TV channel. Its biggest shareholder is C&M, a cable channel operator.

The strategic deal is set to help SK Planet clarify a complicated shareholding structure in danger of violating fair trade law, while iHQ will be able to take advantage of Nate, a portal site linked to Cyworld.

“Nate has huge potential to grow into a mega-size platform that embraces both online and mobile environments,” an iHQ insider said. “Given that the main function of portal sites is content, we intend to establish a new business model by taking advantage of the Nate platform.”

Speculators say SK Telecom is seeing iHQ as a means of expanding its content business and meeting its ambitious goal of achieving 100 trillion won ($84 billion) in corporate value and 15 million subscribers to its media platform by 2018.

Growth at the top carrier has stalled in the past couple of years, as its growth-driving long-term evolution (LTE) network has stopped attracting as many subscribers.

In the aftermath of the government’s crackdown on mobile operators’ use of excessive subsidies to attract more users, the top player lost its long-held market share of over 50 percent in February.

There will not be an immediate change to Cyworld, according to SK Communications.

The website has been on a downward slide since 2011, when it was hacked and users’ personal information was leaked. Few users remain on the site, and those that do mostly use it to look at old memories.

Since posting 46.9 billion won in operating loss in 2012, the company has seen 15 consecutive quarters of losses.