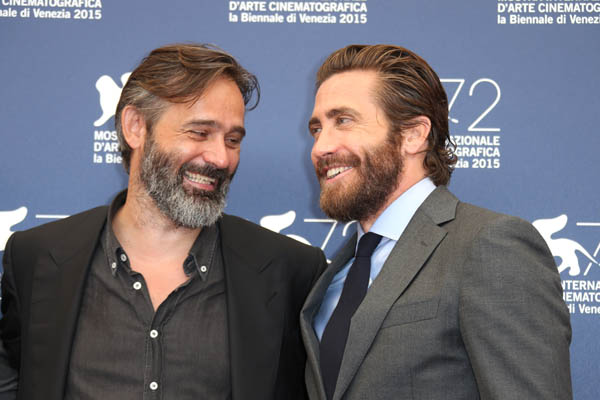 Baltasar Kormakur and Jake Gyllenhaal pose at the photo call for the film ‘Everest’ at the 72nd edition of the Venice Film Festival on Wednesday.[AP/NEWSIS]

VENICE - Jake Gyllenhaal and Jason Clarke lead the cast, but the mountain is the star of “Everest,’’ a high-altitude thriller that opened the Venice Film Festival on Wednesday.

Based on real events, Baltasar Kormakur’s film follows two expeditions caught in a blizzard while attempting to reach the summit in 1996.

Shot in 3-D and on the super-sized IMAX format, the film is a nerve-shredding, life-or-death battle between the mountain and the wind-whipped, snow-blinded, oxygen-deprived climbers. Some live and some die, but as one character notes, “the last word always belongs to the mountain.’’

“Part of telling the story is telling it in the elements,’’ said Kormakur, who took his cast high into the Himalayas and imported snow to England’s Pinewood Studios in his quest for authenticity. “The story happened in the elements.’’

Kormakur, director of the Icelandic indie classic “101 Reykjavik’’ and the Hollywood action comedy “2 Guns,’’ said growing up in sub-Arctic Iceland made him especially suited for the job.

“I trained for this film every day when I went to school, basically in a blizzard, as a kid,’’ he told reporters Wednesday ahead of the movie’s red-carpet premiere.

The film focuses on New Zealand climber Rob Hall (Clarke) and American mountaineer Scott Fischer (Gyllenhaal), who pioneered commercial expeditions on Everest. Both are depicted as passionate climbers who, perhaps unwittingly, unleashed a lethal combination of money, hubris and nature.

The film is implicitly critical of the Everest climbing industry, which has seen several thousand people scale the mountain in the last two decades and more than 250 die. But Kormakur says he understands the “almost animalistic’’ desire to pit oneself against the peak.

Kormakur put his cast through grueling paces, filming in Italy’s Dolomites and near Everest base camp, more than 5,300 meters (17,000 feet) above sea level.

“People started getting really sick at that point,’’ Kormakur said. “And we had to evacuate people with a helicopter pretty quickly.’’

Josh Brolin, who plays a member of Hall’s expedition, said the pain and deprivation forged camaraderie among the cast - though they initially didn’t know what they were in for.

“A lot of directors say, we want to do this for real, we want to bring you in the elements, we want it to be you against nature,’’ he said. “And most of them aren’t telling the truth.’’

“Everest’’ - which features Keira Knightley and Emily Watson in supporting roles - is not among the 21 films competing for prizes at the festival, which runs to Sept. 12.

But the opening-night slot carries considerable cachet, and pressure. The last two Venice openers - “Gravity’’ in 2013 and “Birdman’’ in 2014 - went on to multiple Academy Awards.

Early reviews of “Everest’’ were largely positive. The Hollywood Reporter called it “gripping and immersive,’’ while London’s Time Out praised the “astonishing’’ craft of Kormakur’s 3-D spectacular. The film also has a tragic timeliness, opening months after an April earthquake in Nepal killed almost 9,000 people, including 19 mountaineers.