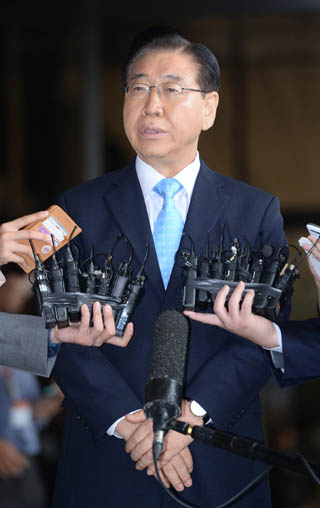 Former Posco Chairman Chung Joon-yang, one of the key figures in an investigation into corruption allegations against the country’s top steelmaker, appeared before the prosecution on Thursday, the first time the 67-year-old was summoned since the probe began six months ago.

Chung arrived at the Seoul Central District Prosecutors’ Office at around 9:50 a.m. on Thursday.

“I feel sorry for worrying the people who have supported Posco, shareholders, executives and staff members,” Chung said.

However, he refused to answer reporters’ questions over the allegations. “I’ll sincerely answer to the prosecutors,” the former chairman said.

The prosecution has been investigating Posco Engineering and Construction and its subcontractors since March, starting just one day after then-Prime Minister Lee Wan-koo declared a war against corruption.

Some 20 Posco subcontractors and subsidiaries have been raided since March 13, when Seoul prosecutors stormed the Incheon headquarters of Posco E&C. About 100 people have been summoned thus far, while 17 have been detained on embezzlement charges.

The prosecution is expected to question Chung about alleged business malpractices during his term from 2009 to 2014 - believed to have done massive financial damage to the group - primarily suspect mergers and acquisitions.

The focus of the investigation is currently on the merger and acquisition of Sungjin Geotec, which was merged into Posco Plantec, an arm that produces steel manufacturing facilities, in 2010 for 160 billion won ($134 million).

An audit by its accounting firm stated that Sungjin Geotec’s sustainability as a company was questionable, but that Posco bought 40.38 percent of its shares, which were worth around 8,300 won per share, for 16,330 won per share. The deal was hugely beneficial to Sungjin Geotec’s biggest shareholder, Sehwa MP Chairman Jeon Jeong-do, who is known to be close with Chung.

Chung also stands accused of having been involved in giving special favors to Dongyang Engineering and Construction, one of its subcontractors, while promoting construction projects overseas.

According to one of the prosecution’s sources, Chung once ordered officials to hand over a project worth 300 billion won to Dongyang, which was part of Posco’s plan to build a steel mill in India.

But after facing internal opposition, Chung reportedly backed down and ended up giving an 85 billion won civil engineering project to Dongyang instead.

Both are still under prosecutorial investigation, though their pretrial detention warrants were denied at court.