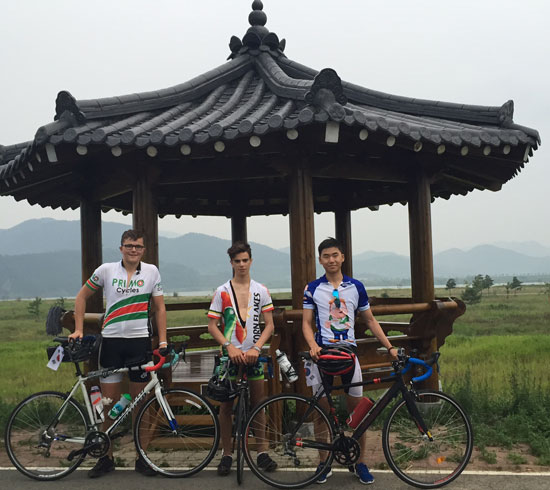 From left: William Hirzel, George Carsons and Son Joo-hwan took a cross-country cycling tour across Korea last month, riding from Busan to Imjingak, Gyeonggi. The boys said they hoped the tour could expand awareness about the plight of teenage North Korean defectors. By Son Joo-hwan

On Aug. 16, when Korea was under a scorching heat wave with temperatures reaching over 30 degrees Celsius (86 degrees Fahrenheit), three 16-year-old students from Eton College started a cross-country cycling tour from Busan to Imjingak, Gyeonggi.

Although they enjoy cycling in their free time, this particular cycling tour had special meaning for Son Joo-hwan, George Carsons and William Hirzel ? because this time it was for young North Korean defectors.

“When I tell my British friends that I’m from Korea, they always ask me what kind of place North Korea is. Whenever they ask me, I notice that I know nothing much about it,” he said.

Shortly after his return to Britain, he proposed to his friends, Carsons and Hirzel, that they raise money for North Korean refugees by cycling all the way across Korea.

For them, the concept of biking through a foreign land was enough to pique their curiosity.

So they collected a purse from the crowdfunding website Indiegogo, where individuals and aspiring entrepreneurs can raise money to realize their ideas, and posted their plans for a cross-country cycling tour.

But the biggest obstacle for their tour was humidity coupled with blazing heat. Summer temperatures reached over 35 degrees Celsius ? a marked difference from the cool rainy summers in the United Kingdom.

Complicating matters even more, on the first day of their tour, Hirzel hurt his leg while crossing a river and had to receive an injection in his swollen knee. Hirzel’s supplies also fell into the river, but despite the setbacks, the three continued on.

It was actually quite lucky that Hirzel didn’t fall into the river, they mused later.

Admittedly, they bickered from time to time during the tour, griping at one another to slow down or speed up, but nonetheless, the funds raised from the crowdfunding site motivated them to keep going.

And after a week of consistent cycling, they finished their tour.

Afterward, they handed over the funds to Durihana International School, a school for teenage North Korean defectors in Seoul.

“When I read an article about North Korea, I was just afraid that the country might provoke a war,” said Carsons, an Oxford, England, resident who acknowledged he hadn’t known much about North Korea before.

“But after learning more about the country, I realized that the conflict between the North and the South is much more severe and long-lasting than I’d thought.”

Hirzel added, “When I heard about teenage North Korean defectors who had suffered from various obstacles before they finally arrived in South Korea, I was so surprised and I thought they were from an earlier era that’s much different from now.”