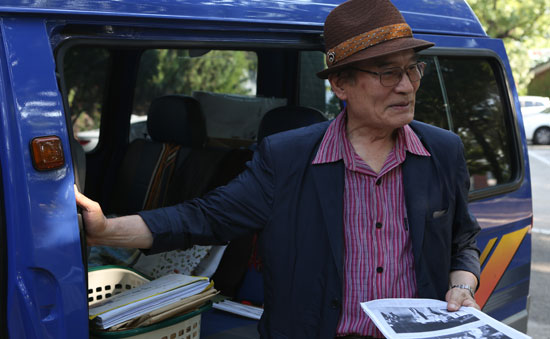 Jeong Seong-gil, the honorary director of the Keimyung University Dongsan Medical Center Museum, displays a photograph that depicts the massacre of Korean residents in Japan during the Great Kanto Earthquake of 1923. By Jeong Hyuk-jun

This year marks the 92nd anniversary of the Great Kanto Earthquake, during which a number of Koreans were massacred, and it’s the inaction since that so troubles Jeong Seong-gil.

“There has been no apology or compensation from the Korean or Japanese governments,” said the 74-year-old, who serves as the honorary director of the Keimyung University Dongsan Medical Center Museum. “Our forbearers died unfairly, and does it make sense that we still don’t know exactly how many people were killed?”

Jong insisted in an interview earlier last month at Keimyung University in Daegu that a memorial should be built for the Korean victims massacred around the time of the Great Kanto Earthquake on Sept. 1, 1923.

He describes how after the magnitude-7.9 disaster, which struck Japan’s Kanto region, rumors spread that its Korean residents “were spreading poison in the wells and attacking the Japanese,” which led Japanese vigilantes and the police to take matters into their own hands, indiscriminately killing local Koreans with bamboo spears and clubs.

Most of the victims, he said, worked at the wharfs or as railway construction laborers.

In 2013, Jeong became determined that a memorial should be built after the Japanese government deleted references to the massacre in its high school history textbooks.

“I believe we need to put a stop to Japan’s historical distortions and properly inform our own people as well,” he said. “That’s why I compiled a booklet of 120 photographs of the Kanto earthquake massacre and worked for a memorial to be built.”

Jeong also circulated a petition for a monument to be built - preferably in Yeongdeok, North Gyeongsang, or Incheon - to help spread word about the brutality of the incident.

Yeongdeok is on nearly the same latitude as Japan’s Kanto region, while Incheon is visited by many Chinese tourists, he said.

Starting at a local high school in North Gyeongsang, the petition gained momentum and has now garnered over 86,000 signatures from middle and high school students.

Jeong said it was “motivating to hear from students,” most of whom didn’t know about the incident.

Over the past two years, the 74-year-old has traversed the nation spreading the word about the memorial project, traveling in his modest stick-shift car that lacks proper air-conditioning. The driver’s seat easily overheats, so he has to layer cushions.

His family members discouraged him.

“Even if you put up a fight against the Japanese, what good will it do?” he said they asked him.

But he told them, “There is no hope for people who forget their history.”

Still, the process to install a memorial to raise awareness for the victims hasn’t been easy. While the victims forced into sexual slavery by the Japanese military or those recruited as laborers during the colonial period receive compensation from the Korean government, there is no government branch responsible for handling or determining reparations for those killed after the earthquake.

Kim Jong-soo, a pastor who led civil efforts to look into the 1923 Kanto massacre, lamented that, despite civilian efforts, “There has been no movement to resolve the Kanto earthquake massacre. … The Korean government has argued that the victims weren’t independence activists [or] overseas compatriots who helped boost national prestige.”

But “If the government cannot do it, we have to step forward,” Jeong said.

“Just like the German chancellor apologized to the Holocaust victims, it is my dream that the Japanese apologize for the Kanto earthquake massacre,” he added, referring to when German Chancellor Willy Brandt symbolically knelt in front of a monument in Poland in 1970 dedicated to the Warsaw Ghetto uprising against the Nazis in 1943.