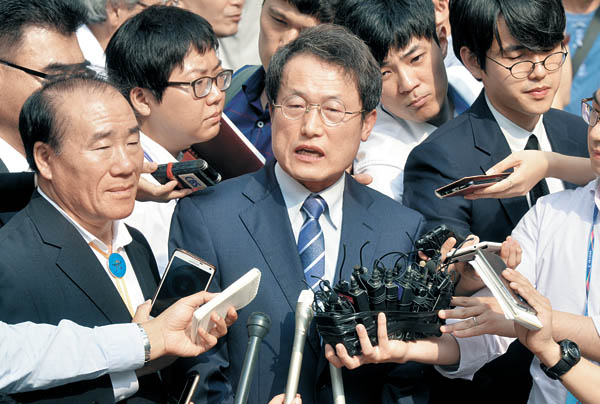 Seoul Superintendent Cho Hee-yeon, center, talks to reporters at the Seoul High Court, southern Seoul, after the appeals court suspended a fine on Friday. Cho’s original ruling was a 5 million won (4,196 dollar) fine that would have stripped him of his position, but with the new ruling Friday, he can keep his job. [NEWSIS]

Seoul’s education superintendent, who was convicted of spreading false rumors about a rival candidate during an election campaign, got to keep his job after his sentence was suspended by an appeals court.

The prosecution did not accept the ruling and said it would bring the case to the Supreme Court.

“We admit that Cho spread false information for the purpose of defeating another candidate,” said Chief Judge Kim Sang-hwan. “But he mainly intended to verify the suitability of the candidate and doesn’t seem to have meant to criticize him.”

The original ruling would have stripped Cho of his position because the education law stipulates that an education superintendent who is fined 1 million won or more or sentenced to any time in jail loses his or her job.

If the decision is upheld by the Supreme Court, Cho may keep serving as the superintendent.

During the campaign for June 4 local elections last year, Cho learned from a social network service posting by a reporter that his rival Koh Seung-duk had permanent residency in the United States. He held a press conference at the National Assembly on May 25, 2014, about a week before the elections, and raised the issue of Koh, the front-runner in the polls, being a green card holder. Cho said a person with permanent residency in a foreign country should not be allowed to serve as a superintendent.

The next day, Koh denied the allegation and said he never acquired U.S. permanent residency.

Cho raised the issue twice more by releasing a statement on May 26 and mentioning it in a radio interview on May 27.

Seoul’s election committee closed the case after giving warnings to both candidates on June 3, a day before the election, but right-leaning educational organizations filed a complaint and the prosecution indicted Cho on Dec. 3, only a day before the expiration of the statute of limitations.

Cho requested a jury trial in January, claiming that the prosecution intentionally targeted him by reopening the case, and the request was admitted in February. The trial went for four days and all seven jury members found him guilty.

After he was found guilty and fined 5 million won in the original trial, he prepared for the appellate trial with a defense team centered on Min Byeong-hun, a former chief judge of the Seoul Central District Court. After retiring, Min has represented heads of conglomerates like SK Corporation Chairman Chey Tae-won.

It was Min’s argument that the sentence should be suspended since Cho’s accusation was only meant to verify Koh’s suitability to be a public official. The court accepted the argument.

“The judge panel admitted some of my guilt and I deeply regret my reckless behavior during the election campaign,” Cho said after the sentencing. “I feel sorry for Koh as well.”