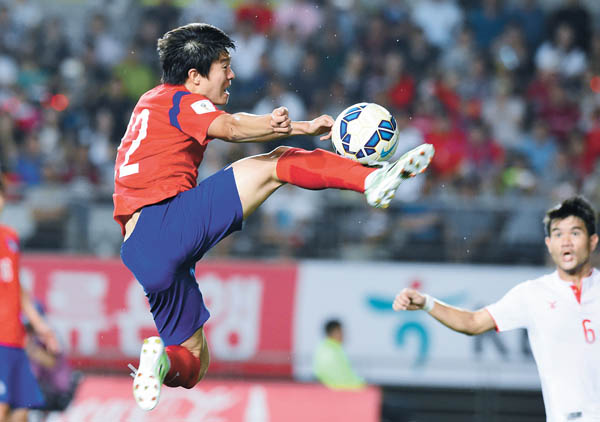 In Korea’s dominant 8-0 victory against Laos last Thursday in the second round of the 2018 World Cup Asian qualifiers, Son Heung-min was the main hero by getting a hat trick.

But if Son was the main dish prepared by coach Uli Stielike, Suwon Samsung Bluewings midfielder Kwon Chang-hoon was the spicy sauce that heated things up.

At the Hwaseong Sports Complex in Gyeonggi, Kwon scored two goals. In the 29th minute, he delivered a powerful midrange shot with his left to make the score 3-0. In the 74th minute, the 21-year-old converted a cross from Jang Hyun-soo to make the score 6-0.

Kwon, who made his national team debut in the EAFF East Asian Cup last month, has now scored two goals in four matches. He is now on track to become a regular member of the Taegeuk Warriors, which are playing another qualifier against Lebanon in Sidon, Lebanon, on Tuesday.

Kwon is a “first-generation prospect” raised by Suwon’s youth system.

After graduating Maetan High School, he entered the K-League in 2013. Experts say Kwon’s biggest assets are his physique which allows him to stand off against defenders and his accurate kicks.

Despite his small height - 1.74 meters (5.71 feet) - Kwon doesn’t tumble against big players, as he learned from Seo, who previously played with RC Strasbourg and SV Salzburg, how to maintain his balance and keep his weight low. With Ko, Kwon learned how to take free kicks and midrange shots.

“Once we teach him something, it becomes second-nature no matter what,” Seo said. “He usually doesn’t talk a lot and is patient, which makes us think he’s mature.”

Kwon’s nickname is “bread-hoon,” or “son of a baker.” His father, Kwon Sang-young, has run a bakery for 30 years to support his son.

“My father made me who I am with the bread he baked from dawn to late at night,” Kwon said. “Whenever I want to quit football, I think of my father. I respect him, and I’m proud of my nickname.”

Kwon is a prospect in the national team, where overseas-based players are still taking the core roles. However, for both Suwon and the Olympic football team, he is considered the pivotal player. In the K-League Classic, he has so far scored seven goals in 26 matches and is among the top candidates for winning the K-League Young Players Award, which is given to the best players under the age of 23.

The Olympic football team coach Shin Tae-yong, who is also an assistant under Stielike, said that Kwon will be busy in October, considering that he needs to help Suwon in the K-League Classic while also playing in Olympic team and national team matches. “We need more prospects like Kwon in Korean football,” Shin said. “I hope he can deliver his best performance in the national team and the Olympic team.”

Kwon’s impressive performance against Laos on Thursday is hopeful, but it doesn’t guarantee his spot on the squad.

After arriving in Lebanon for Tuesday’s match, Stielike said that he won’t change the starting lineup like he did in the EAFF East Asian Cup, where he changed eight players from the previous matches, but hinted that the roster for Lebanon won’t be the same as the Laos match.

In the match against Laos, captain Ki Sung-yueng, Jung Woo-young and Kwon were the starters in center midfield, but Lee Jae-sung of Jeonbuk Hyundai Motors and Kim Seung-dae of the Pohang Steelers are also eyeing the spot.

Two German Bundesliga players have also joined the team. Koo Ja-cheol, who recently joined FC Augsburg from Mainz 05, and Park Joo-ho of Borussia Dortmund, the left-back who can also play in center midfield, are ready to play.

Both missed the Laos match because they were finalizing contracts with their new clubs.