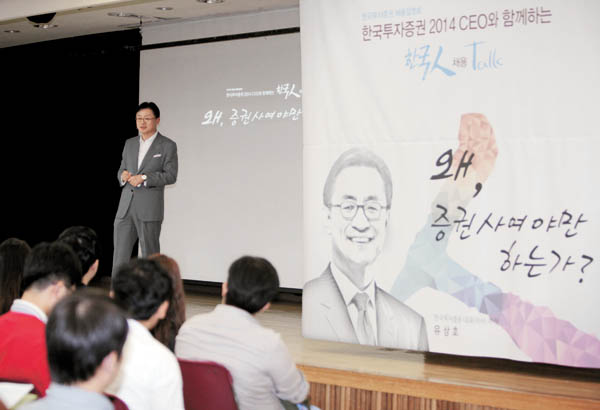 Korea Investment & Securities CEO James Sang-ho Ryu talks to college students while holding his annual CEO campus recruitment tour at Yonsei University last September. As the main presenter, Ryu explained what the brokerage firm does and what talents it wants. Provided by the company

*From tech behemoth Samsung Electronics to automobile manufacturer Hyundai Motor, Korea’s large companies have made strides both at home and abroad over the years. But as they face a generational shift and tougher competition in the global market, the companies find themselves being challenged to foster a corporate culture conducive to enhancing creativity and teamwork. The Korea JoongAng Daily will publish a series on how the country’s major conglomerates are attempting to shift their corporate culture and how these changes will affect the industry’s landscape.

As the nation’s autumn hiring season begins this week, Korea Investment & Securities CEO James Sang-ho Ryu is busy preparing for another round of recruitment events.

This particular executive, however, is known for his personal touch. For the ninth year Ryu himself is making the trip to four major universities - Seoul National, Korea, Yonsei and Hanyang - to actually meet prospective financiers and explain the type of organization he runs.

At the annual September event, Ryu not only explains the direction his company is heading, he also gives straightforward advice from his own personal experience on what it was like for him to be a securities broker for the past 30 years and how the brokerage industry works.

“Working at a brokerage firm is like living the life of an underdog. If you don’t think you will enjoy it, you shouldn’t apply to our firm,” Ryu said at a recruitment event last year held at his own alma mater Yonsei University, as he emphasized the significance of performance. “Financiers should be ready to stand critical feedback every single day from clients.”

Ryu at the same time emphasized the firm’s biggest recipe for success in staying strong with employees through financial challenges instead of simply undertaking corporate restructuring.

“Our core business strategy is to always prepare for the cyclical nature of the brokerage industry, and taking care of the organization is healthy by investing in employees in times of a tough economy,” Ryu said. “I think it [hiring with no layoffs while competitors slim down staff] will be the future growth engine for Korea Investment to enjoy later when the economy recovers.”

Hiring every year and not forcing layoffs are a unique aspect of the firm’s talent management.

According to corporate management assessment firm CEO Score on Thursday, the securities sector has laid off nearly 4,000 people over the past two years, nearly 11 percent of total brokers’ population in Korea. It was the highest level of layoffs in the entire local financial industry, compared to other sectors like insurance and banking, which showed layoffs of just half the level, about 2,000 each.

Meanwhile, Korea Investment hired nearly 100 people over the past four years, even amid the 2009 global financial crisis and the 2010 meltdown in the European economy that affected the Korean stock market. The brokerage firm hired 60 staff in 2009 and 70 in 2010.

While it has continually hired, the company has grown to see its operating profit post at 282.7 billion won ($237.18 million) in the first half of this year, a rise of 110.7 percent year-on-year, and higher than 237.37 billion won in 2012. Korea Investment has also gone to overseas-based universities since 2008 to find quality talent.

The firm hires an average of 10 staff from foreign universities every year, mostly graduates of major colleges and master’s programs of business administration at the University of Hong Kong, Beijing University and Fudan University in China. The process is part of the company’s investments strategy to keep expanding overseas businesses and provide more accurate investment information to Korean investors.

“When do you buy stock?” Kim asked during a recruitment tour at Seoul National University in 2013. “When the prices are cheap. It’s the same with people. That way you can recruit exceptional talents.”

Korea Investment & Securities was the nation’s first investment trust company established in 1974 which expanded after the merger with Dongwon Group’s financial affiliate Dongwon Securities, the leading investment bank, in 1982.

After separating from the Dongwon Group in 2005, the brokerage was incorporated under Korea Investment Holdings, an asset management firm formerly named Dongwon Finance, which also separated out from the group later.

The holding company’s CEO and Vice Chairman Kim Nam-koo is the eldest son of Dongwon Group Chairman Kim Jae-cheol, who founded a small fisheries company Dongwon Industries in 1969 and is still directing the group’s business even at age 80.

Dongwon Chairman Kim Jae-cheol has expanded the company into the nation’s largest fisheries firm and a conglomerate that has more than 15 affiliates in food processing, retail, IT and shipping. The company is based on his firm belief that providing the best working environment and training opportunities for employees leads the company to quality products and services for its customers and clients.

One of the key talent fostering programs at Dongwon is the Thursday Seminar, which has been held every week since 1974 under Kim’s leadership.

Every Dongwon executive has to attend the seminar while employees can watch a live stream on the company’s intranet.

Key executives at Korea Investment, such as Korea Investment Holdings CEO Kim Nam-koo and Korea Investment & Securities CEO James Sang-ho Ryu, have spent most of their careers at Dongwon Securities and are familiar with the traditional Korean corporate culture of requiring all employees to join internal events to strengthen the team spirit.

However, Korea Investment reflects the characteristics of the quickly changing financial business, where team members have their tasks which are analyzed and assessed. The brokerage promotes efficient communication via email or messengers.

Ryu communicates by email, and has made an example of replying back within 24 hours to employees of all levels, from newbies to executives.

“He always tells people the CEO makes an effort to meet and communicate with employees to share the company’s philosophy and vision.”

Ryu cares about employees’ happiness and values them as people and a part of a family. The firm encourages all employees to work fewer hours on Wednesdays to spend time with their families.

After hiring the top talents, Ryu is known to say that “making all employees’ hearts pound with happiness when coming into the office, and leave light-hearted and satisfied, is his utmost goal.”