Kumho calls a lockout after 21 days of strike

Kumho calls a lockout after 21 days of strike 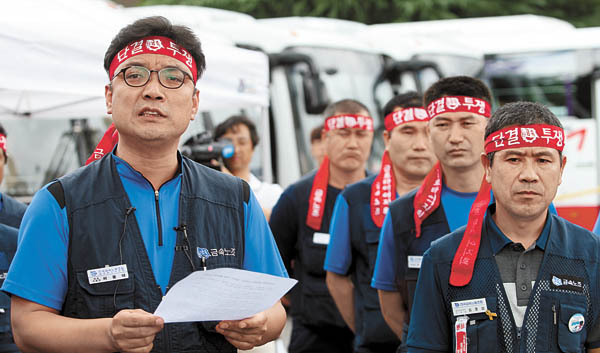 Workers at Kumho Tire announce the extension of the longest strike ever in front of the main gate at the factory in Gwangju on Sunday. [NEWSIS]

Factories in three regions - Gwangju, Gokseong and Pyeongtaek - will be shuttered until the union ends its protests, a notice posted on the main gate of the closed factory in Gwangju said. The notice said entrance without approval from the company will be prohibited and, if violated, would lead to prosecution.

The country’s leading tire manufacturer is suffering from its longest-ever strike, which started Aug. 11 and reached its 21st day on Sunday. Losses in production have surpassed 94 billion won ($78 million), the company said in a press release Sunday.

At the 16th negotiation over the weekend, management proposed the highest increase in daily wages in the tire industry, 4.6 percent or 2,950 won, and offered 3 million won compensation for each worker in return for the company instituting the so-called peak wage system next year.

The system, which gradually cuts salaries for senior staffers years before retirement, is one of the labor market reforms pushed by the Park Geun-hye administration, as the retirement age in Korea will be extended to 60 from 58. Forcing all state-run companies to accept the system, the government is also pressing the private sector to follow suit in the name of job creation for young people, a serious problem in Korea.

Accepting those offers, the union demanded an additional 1.5 million won bonus in exchange for adopting the system, according to a member of management.

“We first proposed a 700,000 won bonus based on our sales in the first half of this year,” said a spokesman for management by phone. “And then the remaining amount will be decided based on the sales in the second half.

“But the union didn’t accept that, only demanding a fixed amount of 1.5 million won, regardless of the performance in the second half. That is the most contentious issue at the moment.”

Workers say that what matters to them is not the bonus but that the company is pushing the system unilaterally.

“There are no details on how much they will cut wages of people nearing retirement or how many new jobs will be created for young people in return.”

A group of negotiators from the union held a press meeting in front of the gate at the factory in Gwangju.

“The offer provided by management is an evil act,” they said in a statement, “meant to revise the employment rules in favor of management even if we don’t agree on the peak salary system.”