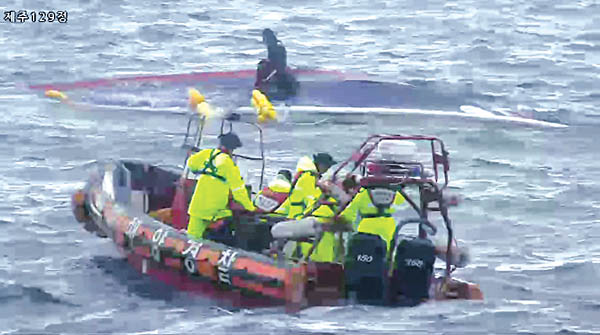 The video image shows coast guard officers carrying out a rescue operation for a fishing boat near Jeju Island on Sunday. [NEWSIS]

At least 10 people died and an unknown number remain unaccounted for after a chartered fishing boat capsized off the country’s southern coast near the resort island of Jeju, maritime authorities said Sunday.

As of press time, three people were rescued and transported to nearby Jeju Halla Hospital’s intensive care unit for hypothermia, according to local authorities. Their injuries are reportedly not life-threatening.

Among the 10 fatalities, some were found in waters within 500 meters (0.3 miles) of the site of the accident. The captain, Kim Cheol-su, 46, was among the dead. No bodies were found inside the boat, which was searched.

It is unclear how many people are missing. Jeju coast guard officials said authorities have failed to accurately identify all the paid passengers that boarded the 9.77-ton boat named Dolphin from Chuja Island, just north of Jeju Island, Saturday evening.

The Coast Guard estimates 21 people to have been on board, leaving the number of missing at eight.

Most of them were passengers paying to fish for recreation. They were returning from a fishing outing Saturday night.

Authorities have yet to disclose the captain’s sailing experience.

The Dolphin lost communication with another boat at 7:38 p.m. Saturday, some 40 minutes after it left Sinyang Port on Chuja Island for Namseong Port in Haenam County, South Jeolla.

The boat was initially reported missing to maritime authorities at around 8:40 p.m. It was discovered capsized nearly 11 hours later by a chartered fishing boat that was passing nearby.

The boat was found in waters 1.1 kilometers south of Seomsaengyi Island, an uninhabited area south of Chuja Island, some 4.5 kilometers southwest of its last known location. All survivors were found on top of the capsized boat.

Authorities have yet to identify the cause of the accident, but one survivor told the JoongAng Ilbo, an affiliate of the Korea JoongAng Daily, that high waves and heavy rainfall might have led to the boat turning turtle just 20 minutes after it departed.

“Passengers were holding tight onto the hull of the [capsized] boat,” recalled Lee Sang-jeom, 47, one of a team of 12 people from Busan who were on a fishing trip. “But then, one by one, they started to lose grip and drift away.”

“There weren’t any boats passing by, but we did see a Coast Guard vessel that had its search lights turned on. I thought it was coming to rescue us, but no matter how much we screamed [for help], it wouldn’t steer our way,” Lee continued, adding that he wasn’t wearing a life jacket at the time of the accident because he “took it off” on board.

Jeong Jeong-sam, 44, the captain of a chartered fishing boat that arrived at Chuja Island an hour before the Dolphin departed, said “[Weather] conditions were harsh enough for anyone to determine it was impossible for a boat to sail.”

But, he said, “passengers must have pestered the captain to take off anyway, out of fear they might get trapped on the island and be absent for work on Monday.”

Some 50 Coast Guard and Navy vessels have been mobilized for ongoing rescue operations.