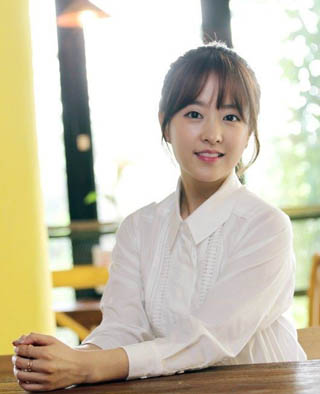 Once an up-and-comer in Korea’s entertainment industry, actress Park Bo-young has since positioned herself as an irreplaceable asset.

Her earlier performances were by no means disappointing, but none showed off her charms as much as the recent tvN drama “Oh My Ghost.”

In the show, which aired its final episode last month, Park took on a dual role: Na Bong-sun, a quiet, timid girl who - when possessed by the restless ghost Shin Soon-ae - transforms into a provocative, foul-mouthed temptress. When bewitched, Park’s protagonist blurts out seductive lines non-stop to her on-screen love interest, Kang Sun-woo (Cho Jung-suk).

And it’s hard to imagine those lines, delivered in such an endearing fashion, spoken by anyone other than Park, whose girlish appeal lent itself perfectly to the character.

Her performance offered viewers an opportunity to re-evaluate her star potential and finally saw Park break out of her perpetual role as a diligent young student.

In a recent interview with Ilgan Sports, an affiliate of the Korea JoongAng Daily, Park also noted that the show marked the first time in her decade-long career in which she had an on-screen kiss - a turn that marked a true departure from her previous characters.

Q. “Oh My Ghost” was your first time back on the small screen in seven years. How did you feel?

A. The producer, Yoon Je-won, and the screenwriter directed me very well. The filming process was also pleasant. I was always excited to go on a shooting.

Why did you stay away from dramas for so long?

I always wanted to do dramas, and I’ve actually come across many good projects. But after seeing so many delayed or cancelled, I just started to feel like me and drama weren’t meant to be.

Do you realize how much your popularity has increased?

Actually, I’ve been doing interviews since I shot the last episode, so I don’t feel it directly at the moment. I didn’t believe it when people around me told me the drama was a hit, but after seeing the viewership ratings, I started to believe it.

Which character are you most like in real life? The quiet girl or the lascivious one?

I feel I’m right in between the two characters. Sometimes I keep problems to myself but sometimes I can be really bold.

How do you feel about taking on a character who blurts out such indecent lines one after the other?

It was a really fun experience. Sometimes I didn’t know how to act when delivering lines like, “I want it right now,” or “Let’s rest a little bit at that motel.” I tried not to be too serious about it and just spit out the lines very playfully. The director liked it, too.

You had many on-screen kisses. What was it like?

It was my first time doing something like that, so when I read the script, I asked the producer if I had to do it. I guess I wasn’t fully prepared. Maybe I stayed away from dramas because I wasn’t ready to film scenes like that.

Even though you’re still young, it’s been 10 years since you made your debut in the entertainment industry. Did you have any difficulties along the way?

I don’t really feel like 10 years have passed already. I went through so many ups and downs, and before, I didn’t think I could do this for 10 years. These days, I have the time to look back on my past and reflect on if I’ve been doing alright.

I haven’t had time to look through my next project. Right now, I’m waiting for two of my films to open later this year.