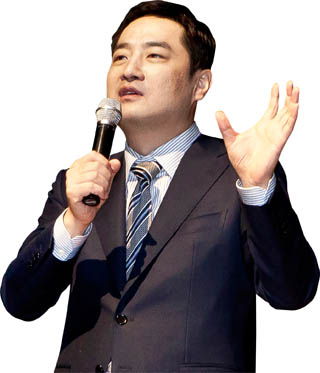 A female blogger who has been engulfed in an adultery scandal with lawyer-entertainer Kang Yong-suk revealed the truth about the controversial photos taken at a swimming pool.

The blogger revealed Sunday that the two photos of a man at a swimming pool taken in Hong Kong were of Kang.

“[We] went to Hong Kong due to separate business, [our] entrance dates [to Hong Kong] were completely different and we stayed in different accommodations, which were located far away from each other.

“After getting in touch during the day while working on individual projects, [we] made a dinner appointment, and since there was quite a bit of time left before dinner, we spent some time in my hotel’s swimming pool.”

She added that she was deeply sorry for denying that the man in the photo was Kang.

In her official statement, the female blogger wrote that in contrast to the public’s beliefs, she never posted the widely talked-about photos on her personal SNS account.

As a result, an investigation is ongoing to uncover how the photos spread through the internet, which the blogger believes involved some kind of illegal activity.

The blogger has also filed a civil suit against the Korea Dispatch, a media outlet, for writing articles speculating about her relationship with Kang.

The case went public after the blogger’s husband filed a lawsuit against Kang in January, demanding 100 million won ($83,000) in damages.