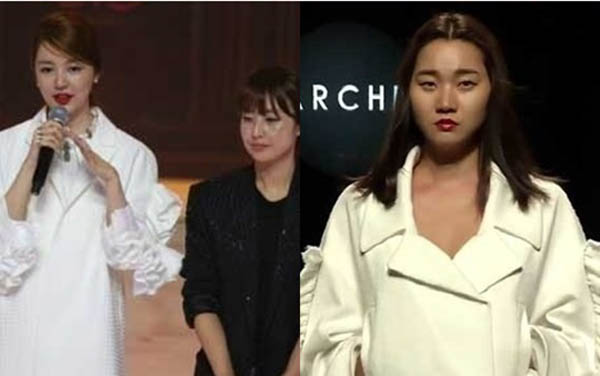 The Council of Fashion Designers of Korea (CFDK) said Monday that the clothes showcased by actress Yoon Eun-hye in Chinese reality program “Goddess’ Fashion” seem to have been plagiarized.

The case came to light after designer Yoon Choon-ho posted on his personal Facebook account on Saturday, claiming that the TV personality won the program, in which teams of designers and a celebrity create new clothes, by plagiarizing his design.

Shin Jang-kyung, the vice president of CFDK, emphasized that “to a fashion designer, design is everything.”

Actress Yoon’s talent agency, JARMY Entertainment, denied the accusation on Sunday, claiming that her inspiration for the clothing was a famous film.

“‘Goddess’ Fashion’ is a reality program that five groups of a celebrity and designers come up with fashion collections related to a weekly mission,” the company said in an official statement.

“The movie that Yoon chose was ‘The Chronicles of Narnia: The Lion, The Witch and the Wardrobe,’ and to express the lion and white snow in the movie, she chose all-white [for the clothes] and also used frills as a reference to the lion’s mane.”