Korean won pushes beyond the 1,200 barrier

Korean won pushes beyond the 1,200 barrier 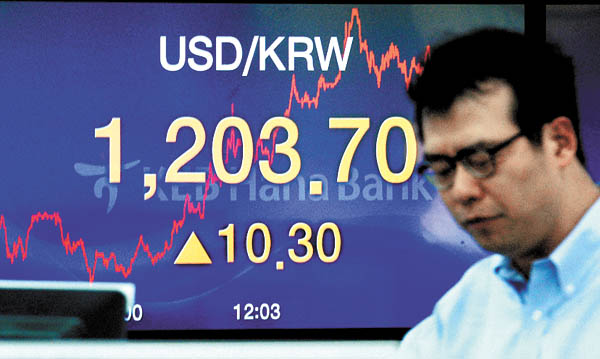 The won closes above 1,200 to the greenback at the KEB Hana Bank’s headquarters Monday.[NEWSIS]

The won-dollar exchange rate crashed through the psychologically significant 1,200 won against the U.S. dollar rate on Monday as the currency market reacted to mounting concerns that a Federal Reserve interest rate hike was near.

The won’s value fell to close at 1,203.70 won against the greenback on Monday. This is the first time the exchange rate has topped 1,200 won in more than five years since hitting 1,204 won per dollar on July 22, 2010. The currency has lost around 2.7 percent in the four trading days through Monday.

Analysts said the won would continue to trade at around 1,200 won per dollar until the U.S rate uncertainty clears.

“All eyes are on the U.S. and the biggest question in the market is when will the Fed raise the rate - September or December?” said Moon Jeong-hee, an analyst at KB Investment & Securities. He said volatility in the Seoul currency market will likely persist until mid-September, when the Federal Open Market Committee is expected to hold a meeting.

The Bank of Korea (BOK) was not expected to interfere as a weaker won tends to help boost Korea’s exports, which have been sinking this year.

“The won’s weakness is not the biggest concern right now for the BOK,” said another analyst at a brokerage who declined to be named. “The state of the economy is, as GDP growth is widely predicted to miss its forecast from earlier this year.

“There may be suggestions of a further rate cut [among committee members at the BOK], but I am doubtful whether this would help lift the economy any further … the biggest issue right now is the external factor, most of all the slowdown in exports,” he
added.

The central bank reduced its benchmark interest rate to a record low 1.5 percent in June and has held it steady since. It is scheduled to meet this Friday for a monthly rate meeting.

Japan’s yen also retreated 0.3 percent to 119.28 per dollar on Monday, capping its biggest weekly advance this year on Friday. The yen is currently weaker against 15 of the 16 major currencies.

“Since around 2010, the Japanese yen has weakened 35 to 40 percent, while the won gained around 30 percent, and this gap certainly has had negative effects on Korean exports that compete directly with Japanese rivals,” said Park Jeong-woo, an analyst at Korea Investment & Securities.

The pricing competitiveness of some Korean products has deteriorated compared with Japanese exports, whose value in dollar terms has gone down, making them more attractive for consumers overseas.

But the won’s latest weakness indicated the currency was in the process of narrowing the gap with the yen, and there is “more room for the won’s weakening than for the yen at this point,” Park said.