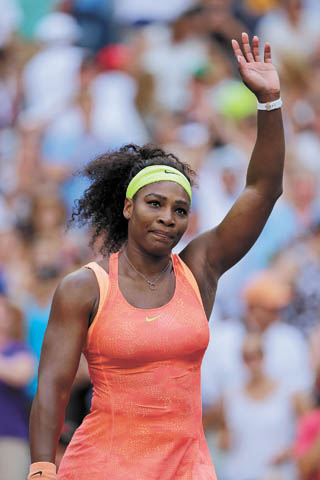 NEW YORK-There was no reason for any extra practice after this performance by Serena Williams.

And it’s not as if she needs to study too hard to figure out how to deal with her next opponent.

Playing at her best in this U.S. Open as she chases a calendar-year grand slam, Williams set up a quarterfinal against older sister Venus by making only six unforced errors in a 6-3, 6-3 victory over 19th-seeded Madison Keys on Sunday. Looking ahead, No. 1 Serena described No. 23 Venus this way, “It’s like playing a mirror.’’

Serena took only 68 minutes to dismiss Keys, a 20-year-old American with formidable serves and forehands who simply was outplayed.

Already a winner of the past four major tournaments, including last year’s U.S. Open, Serena is trying to become the first tennis player to win all four in the same season since Steffi Graf in 1988.

Asked why it’s been so long since anyone else pulled off a true Grand Slam, Serena paused for effect, smiled and answered, “I don’t know why it took me so long.’’

Standing in the way at the moment is Venus. This will be the 27th all-Williams match over their long and successful careers, and Serena leads 15-11, including 8-5 at majors. Each has beaten the other twice at the U.S. Open, with Venus winning the 2001 final and Serena the 2002 final.

Venus, of course, knows full well the challenge that awaits on Tuesday.

“What else can you do, except try to win the point and hope she doesn’t hit an ace?’’ said Venus, who lost in the third round or earlier at each of the past four U.S. Opens.

The sisters’ mother, Oracene Price, said she wouldn’t attend the quarterfinal. As for whether Venus will be in a tough spot - hoping to win, yet also well aware of what her sibling is pursuing - Price said, “I know it’s going to be hard, because I know [Venus] wants [Serena] to get it.’’
AP