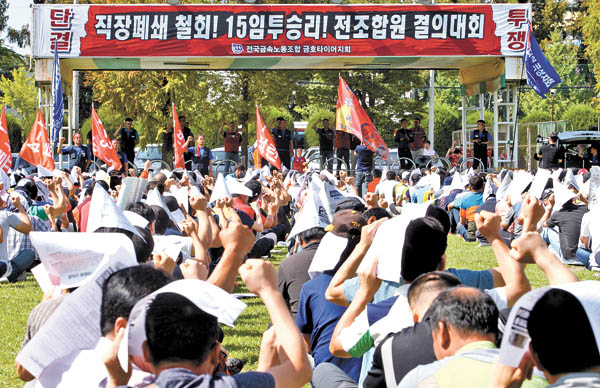 Labor union members of Kumho Tire stage a rally at the company’s Gwangsan plant in Gwangju on Monday, calling for the tire maker to withdraw the lockout. [NEWSIS]

Riot police were called in to control more than 3,000 unionized workers demonstrating at Kumho Tire’s plant in Gwangsan District, Gwangju, on Monday after the company locked them out on the 21th day of strike.

Workers have staged a walkout at the nation’s second-largest tire maker since Aug. 17 over stalled wage talks.

On Sunday, the company announced it was shutting down its production lines at its three plants in Gwangju; Gokseong, South Jeolla; and Pyeongtaek, Gyeonggi, from 7 a.m. on Monday and locked out its workers. This prompted a huge rally on Monday at the Gwangsan plant in Gwangju.

Union leaders demanded the company cancel the lockout immediately and warned that the rally would grow until their demands are met.

The company said, “The lockout will not be withdrawn unless the strike is stopped, but we might resume negotiations.” No further negotiations have been scheduled.

Police dispatched about 1,200 riot police officers to deal with potential violence after the company put nine buses at its front gate to block strikers.

Some workers managed to get into the plant though no violence was reported to police.

“There were some people who got into the facility, but the company didn’t act on it,” said a spokesman for Gwangju police. “It looks like the company allowed the protest but didn’t want to create a riot.”

The union began its partial strike after 16 rounds of unsuccessful negotiations since May 27 over a wage dispute.

The company said the strike has cost about 94 billion won ($78 million) in losses, about 6.6 percent of Kumho’s annual revenue in the country.

The two biggest issues that have stalled this year’s wage negotiations are the peak wage system and a bonus that the unions are demanding.

In negotiations last weekend, the labor union said it wants the company to delay adopting the peak wage system to next year.

The company has offered a 3 million won bonus and a raise of 2,950 won to workers’ daily pay, a 4.6 percent rise from a year ago, in exchange for accepting the new wage system this year. The union countered by demanding an additional bonus.

“The labor union demanded an additional 1.5 million won as a performance-based bonus, which is nonsense because the company’s overall performance records aren’t even figured out yet,” a spokesman for Kumho told the Korea JoongAng Daily.

“The reason the strike is still going on is because the company is aggressively pushing forward to implement the peak wage system this year,” said a spokesman for the labor union.

“The company is currently trying to fix its regulations related to the wage system so that it can operate the new wage system without an agreement from the labor union next year.”