Success of cruise ships seen to hinge on China

Success of cruise ships seen to hinge on China 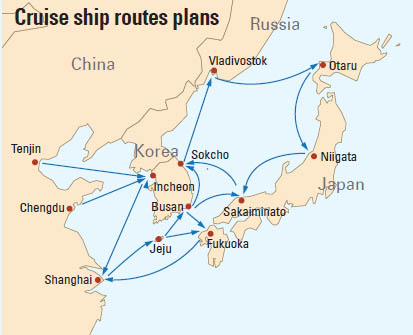 Hyundai Merchant Marine is planning on entering the cruise ship business with the first vessel to include a foreigners-only casino, according to an industry insider.

The entrance of a major conglomerate is expected to boost the cruise ship tourism industry, but the real test will be how many Chinese tourists Hyundai and other potential operators are able to attract.

According to the Korean Ministry of Oceans and Fisheries and the local shipping industry, Hyundai Merchant Marine is currently negotiating the details of a joint deal with Panstar Group, which currently runs a cruise between Busan and Osaka and also operates a cargo business. A U.S. hotel management company is also expected to join as an investor.

The three companies are expected to sign an investment agreement within the month. 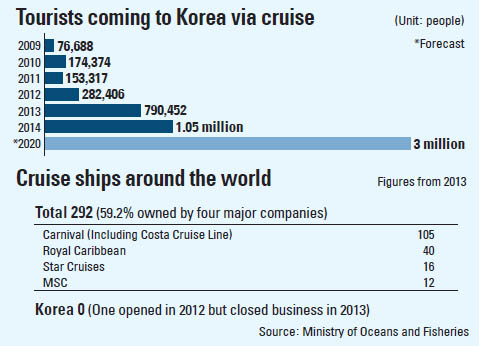 “Each company will cover an equal share of the 200 billion won [$166 million] it costs to purchase a cruise ship, and they also have plans to bring in insurance companies and foreign tourism agencies,” said an official with knowledge of the agreement.

Last year, 1.05 million foreign tourists visited Seoul via cruise ship, a 32 percent increase from the previous year. In 2009, there were only 76,000 who traveled to Korea via cruise ships. The government estimates that three million visitors will come via cruise ship by 2020.

However, the profits generated from cruise tourism were taken mostly by Chinese tourism agencies and the American and European companies that own the ships.

“Korea has the best conditions for the cruise business in North Asia, where travelers can enjoy cities next to ports and at night sleep on the boat,” said Kim Jong-dae, a professor at Daekyung University who specializes in the cruise industry. “But net profits have been shrinking as the profits earned from regional tourism are being paid to Chinese tourism agencies.”

There are no “official” cruise ship companies currently operating in Korea. In order to get a license from the government, a company needs to send a vessel to three countries on the same journey.

Companies like Panstar, which operate cruises to a single country like Japan, are not considered by the government an “official tourism business.”

The last official Korean cruise company in operation was Harmony Cruise in 2012, but it closed its doors after less than a year.

Yoo Ki-june, the minister of oceans and fisheries, is trying to convince major Korean companies to take part in the industry by stressing the opportunities for profits and the benefits their participation would bring to the nation.

Among the new industry-boosting regulations, one of the most talked about was the government’s promise to approve a foreigners-only casino on a cruise ship.

No one has formally applied for the right to operate one of the casinos, but a vessel could set sail as early as next year once the Ministry of Culture, Sports and Tourism, which issues the license, approves the joint cruise project by Hyundai.

The government and companies are mostly targeting Chinese tourists, which account for roughly 87 percent of the foreigners visiting. The cruise ship will travel from Shanghai to Incheon, and then to Jeju.

Panstar is currently developing a program that includes a K-pop concert on board, as well as a route that will travel to sites on Jeju Island where famous Korean TV shows were filmed.

“Estimating how many Chinese tourists we can attract is the most important task at this early stage,” a Panstar official said.

If tourism programs for Chinese tourists used to focus on shopping, experts are saying that today’s programs should emphasize famous cultural sites.

The Korea Tourism Organization proposed that instead of leading tourists to duty-free shops, the cruise ships should visit Beomeo Temple in Busan, which will allow passengers to experience Buddhism in Korea.

“Foreign tourists will come visit Korea again when the related industries join forces and the government shows consistent policies,” said an official at the tourism organization.

There are also some cruise itineraries in the works that would send vessels along the east coast of the Korean Peninsula to Japan and Russia.

The Gangwon provincial government and Lotte Tour signed an agreement recently to develop a program in which they would rent a 70,000-ton foreign cruise ship to travel from Donghae port in Gangwon to Vladivostok, Russia, and then to Japan, finishing its journey in Busan. The cruise is scheduled to launch in May 2016.

Some are hoping that once Hyundai Merchant Marine, which was in charge of the Mount Kumgang tour in North Korea between 1999 and 2009, joins in the government’s cruise tourism initiative, it might somehow open doors into North Korea.

“It would help attract more foreign tourists if we could diversify the routes when utilizing cities in North Korea like Wonsan,” said Lee Byeong-seung, who is in charge of cruise ship business at the Gangwon provincial government.