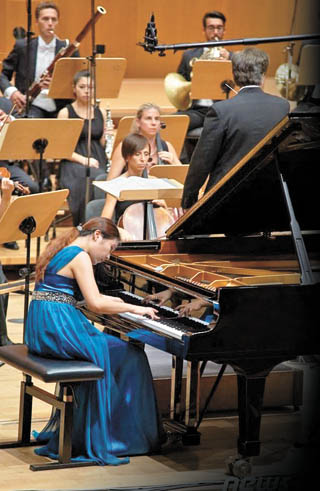 Pianist Mun Ji-yeong plays at the 60th Ferruccio Busoni International Piano Competition in Italy on Friday where she became the first Asian to win the first prize. Provided by K-ARTS

According to K-ARTS, Mun played Chopin’s Piano Concerto No. 2 in F Minor for the final round of the competition and received a high score from the judges.

Despite growing up in underprivileged surroundings - she was raised by parents who subsisted on the country’s basic livelihood welfare payment - Mun began learning the piano at the age of 6. As she did not have a piano of her own, she is said to have practiced the instrument at a church and at a piano hagwon, or cram school. Her dream of becoming a pianist is said to have never wavered.

As part of Korea National University of Arts’ Culture Day program next month, which falls on Oct. 28, Mun is planning to perform and have a dialogue with the audience during the “Noon Concert” at the school’s Daehangno campus in central Seoul.