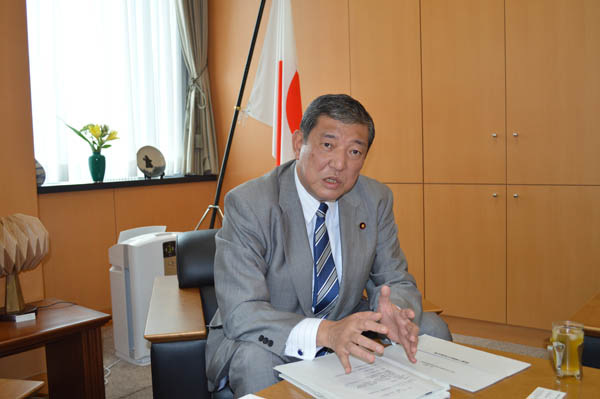 Shigeru Ishiba, considered a strong prime ministerial candidate to succeed to Japanese leader Shinzo Abe, emphasized in an interview last month with the JoongAng Ilbo that there is no future for the country without rural revitalization.

But the issues he tackles - a declining population, low birthrate, a quickly expanding aging society and the high concentration of people in the capital as opposed to rural regions - are also concerns Korea is working to combat at home.

Ishiba, the former secretary general of the ruling Liberal Democratic Party (LDP), has worked hard to encourage the Japanese people and domestic companies to return to rural areas to help reboot the economy and sustain the population.


Q. What is the story behind the creation of the ministries for national strategic special zones and for revitalizing the local economy?

A. LDP cabinets, to date, have appealed for policies for regional revitalization.

The [Kakuei] Tanaka cabinet (1972-74) planned the remodeling of the Japanese archipelago, while the [Masayoshi] Ohira cabinet (1978-1980) planned a countryside city design - combining a taste of the countryside in the city.

But what the [Shinzo] Abe administration is trying to do is completely different. The remodeling of the Japanese archipelago and other rural projects were ideas for when Japan’s population was increasing and there was economic growth. Right now, Japan is facing the problem of a sharp decline in population. Japan’s population is currently estimated at 127 million, but this will decrease to 14 million people in 200 years [based on the current birth rate], and four million in 300 years.

By 2900, there will be 4,000 people. Tokyo is beginning to become an aged society at a speed unmatched from before. The plans for regional revitalization through public projects are not popular enough. So the potential of our rural regions must be more fleshed out.

What are your plans to reduce the concentration of people in Tokyo?

Seoul might also be the same, but Tokyo cannot produce food. Likewise, it is nearly impossible to produce renewable energy. Fertility there is decidedly the lowest nationwide. The state cannot think, so long as Tokyo remains, that it doesn’t matter what happens in the rural regions. There was a request this time around to make a plan for the next five years, targeting local governments nationwide. I think these next five years will be the challenge. To an extent, the rural areas are the leading force and the central government its support.

There was no system before that linked the policies for population decline and rural revitalization.

Tokyo’s income is high but houses are cramped, and commuting to work takes on average more than one hour. The cost of living [is also high]. It’s hard for children to be born in such a place. In rural regions, houses are large and the commute takes 20 minutes. And the cost of living is lower.

If there are stable job opportunities in rural areas, I think youths will definitely go. Komatsu is a Tokyo-based company that makes bulldozers, but it transferred most of its headquarters capacities to the city of Komatsu in Ishikawa Prefecture. The Komatsu office had much higher marriage rates and birthrates than the Tokyo headquarters.

Because population decline and rural revitalization need to be tackled long term, wouldn’t it be difficult for there to be progress if a political leader who prioritizes his or her legacy takes charge?

The [Takeo] Miki cabinet (1974-76) did not make any subsequent moves after the preceding Tanaka cabinet to remodel the archipelago. Ohira’s successor, the [Zenko] Suzuki cabinet (1980-82), likewise, did little to follow up with the countryside city plans. Now, it will take 20 to 30 years for our policies to see the results. It’s important for the current administration to choose a clear direction so that whoever becomes prime minister in the future will not change the flow of the policy.

What policies are in place to support people living in Tokyo outside of the city?

Over 50 percent of males living in Tokyo say they want to move to the countryside. There is hope. We are pushing for a policy to help them return to their hometowns while they are still healthy. Even if their companies don’t need them anymore, when they go to the countryside, there will definitely be a place that will welcome them. I want to make a community there where the old as well as the young can live together.


There is little difference between Japan and Korea in regard to our declining youth population and increasing older population, or the crisis of the rural areas. Do you have any thoughts on areas in which the two countries can work together or cooperate?

Japan is an advanced country when it comes to handling problems. It has experienced many problems first, before other Asian countries. We would like to share with Korea our experience, if we are in this together, and say, “This is how we succeeded,” or “This is where we didn’t do so well.”

If possible, I think it would be good to have a relationship where we can conduct joint research to teach each other and learn from each other.