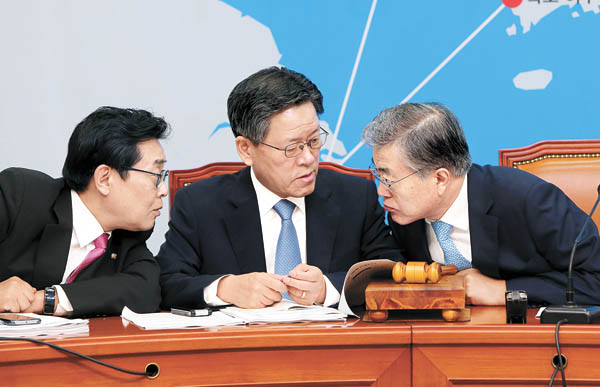 The main opposition party announced an ambitious plan on Monday to overhaul its nomination system by introducing two-stage primaries opened to the general public. Advantages will also be engineered into the system for political rookies.

The head of a reform committee for the New Politics Alliance for Democracy (NPAD), Kim Sang-gon, held a press conference in the morning and announced new rules for nominations for next year’s legislative elections. The announcement was the last in a series of reform measures announced by the committee, created in June after the NPAD’s bitter defeats in April by-elections.

According to Kim, the basic concept of the new nomination system is introducing a public panel of 300 to 1,000 people for each constituency to select the NPAD candidate. The NPAD will create the panels in advance by receiving applications from the public.

The party has not figured out yet whether it can fully guarantee the panel’s anonymity by protecting telephone numbers in telephone polls. If it can afford such a technical solution, candidates will be selected 100 percent through votes by the general public through either telephone polls or voting in a polling station. If it cannot fully guarantee phone number anonymity, 70 percent of a candidate’s score will be from members of the general public - voting by phone or at a polling station - and the remaining 30 percent will be votes by party members.

The first round of the primary will winnow down the field to two candidates. A second round will select the candidate for each district. Voting will be done in the same manner in both rounds.

“The goal of this reform plan is creating a system in which competitive candidates will be selected to bring victory to the party,” Kim said. “It is to transform our party into a political party of the people concerned with people’s livelihoods and welfare - and a ruling party.”

The plan to select candidates through public panels is expected to be very unpopular with veteran politicians of the NPAD.

Allies of the late President Roh Moo-hyun, known as the pro-Roh faction, are expected to favor a primary open to the public. The NPAD’s current chairman, Moon Jae-in, is a leader of that faction. In contrast, veteran politicians who have long served the party would have an advantage in primaries where party members cast ballots.

Kim also said Monday that political rookies will gain bonus points in the final round of the nomination process. They will receive an automatic 10 percent of the votes they win in the first round.

The rookie benefit cannot go to former or incumbent lawmakers, reelected heads of local governments and regional committees and members of metropolitan and provincial legislative councils. People who previously won legislative nominations or who participated in primaries for the constituency more than twice in the past are also ineligible.

The reform committee also said women, younger people and candidates with disabilities will be given bonus points of up to 25 percent of what they win in the first round.

A point deduction program will also be introduced. Any elected public servant who stepped down from a post before completing three-quarters of the term will face a 10 percent deduction in the primary.

While the reform committee promoted primaries open to the public, it still decided to operate a strategic nomination committee, which will largely be under the control of the party chairman.

The strategic nomination committee will have up to 15 members, with more than 50 percent of them recruited from outside the party. Its chairman will be appointed by the NPAD chairman based on the Supreme Council’s approval, and the members will be chosen by the strategic committee chairman.

NPAD Chairman Moon will have a strong influence over the strategic nomination process if he stays in the job until the next general elections.

The party also decided to include more women candidates for the proportional representation roster.

“Turf protected by factionalism and established rights won’t be guaranteed anymore,” Kim said. “Those fiefdoms must be taken away at all cost.”

He said people who have ethical and moral issues and those who have instigated disunity and distrust inside the party must make their own decisions about their futures. “The party will need to show no tolerance for them,” he said.

So far, Kim announced 10 reform plans, and the nomination overhaul plan is scheduled to be deliberated and voted on by the NPAD’s Central Committee next week.

Key members of the NPAD who are not allies of Moon have protested the reform committee, and the fate of the nomination overhaul remains unclear.

Rep. Joo Seong-yong, a member of the NPAD Supreme Council and a critic of the pro-Roh faction, said Monday the reform committee was given authority for greater reform, not to fuel an internal power struggle. He said the committee is not getting favorable reviews both inside and outside the party and urged Kim’s committee to listen to public sentiment.

The ruling Saenuri Party sneered at the NPAD’s nomination reform plan, urging it to accept its proposal of holding open primaries to select candidates on the same day.

The ruling party has been promoting open primaries to field candidates for the April 2015 general elections. In an open primary, eligible voters who are not members of a political party may cast ballots, though it is rare for non-members to actually participate. To hold a completely open primary, the Saenuri Party proposed to the NPAD that it hold its primary on the same day to prevent the possibility that opposition supporters would participate in the ruling party’s primary and vote for weaker candidates.

Rep. Lee Jang-woo, spokesman for the Saenuri Party, said the opposition’s plan to create a strategic nomination committee is a tactic to give NPAD Chairman Moon the power to control the nomination process.

“The plan to allow the party chairman to appoint the strategic nomination committee head is an admission that only his political allies will win nominations,” Lee said. “The public nomination panels are the sugarcoating, but the NPAD has revealed the limits of its so-called reform.”