Negotiations on reunions stretch into the night

Negotiations on reunions stretch into the night 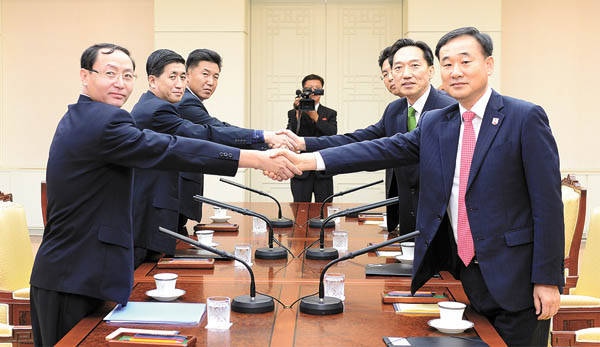 Red Cross officials from the two Koreas shake hands before kicking off working-level talks at the border village of Panmunjom on Monday to discuss starting reunions of families separated by the over 60 years of division on the peninsula. On the right is the South Korean delegation. Provided by the Ministry of Unification

South and North Korea held working-level talks to discuss resuming reunions of families separated by the 1950-53 Korean War after a breakthrough deal last month that raised hopes for a thaw in inter-Korean relations.

Three officials from the South were still at the negotiating table with their North Korean counterparts at the truce village of Panmunjom inside the demilitarized zone as of press time Monday to try to reach consensus on the scale, venue and timing of the upcoming event, for which some 66,000 people in the South have registered.

The three-member delegation from Seoul was led by Lee Duck-hang, who said on his way to the truce village that his delegation would do its best to “meet the expectations” of the anguished South Koreans who have been separated from their beloved ones for over 60 years.

While no details were given by the government on the progress of the talks, it was anticipated that the two sides were debating the dates of the latest round of reunions, emotional events since they first began in 2000 as a result of the first summit between the two Koreas, which produced a landmark joint declaration in Pyongyang.

It was thought that Seoul wanted the reunions to be held before Oct. 10, the 70th anniversary of the foundation of the North’s Workers’ Party, in case the North chooses the occasion to make another provocation on the South, such as the testing of a ballistic missile. Such a provocation would probably kill the chance to hold any reunions.

The fact that the two sides were having such protracted talks - they went into their ninth hour at 8 p.m. Monday - suggested there were discrepancies in the demands of the two sides.

The working-level talks on Monday came amid heightened expectations for improvement in inter-Korean relations after a six-point agreement was reached between the two rivals on Aug. 25, which defused tensions that could have led to a direct military clash along the border.

After 43 hours of talks, the two Koreas agreed to hold family reunions and facilitate inter-Korean cooperation and dialogue, sparking some hopes that an opportunity for better inter-Korean ties had come after years of a freeze. It was expected that the delegations were discussing whether they should hold reunions on a regular basis and enlarge the size of the reunions from earlier events.

Since a majority of the 66,000 registered relatives in the South are in their 70s and 80s, the Park Geun-hye government has called for larger reunions on a regular basis to make sure that they all get a chance.

The trio from the South was also thought to have pressed the North to allow exchanges of letters between separated families and check whether sought-after relatives are still alive.

Should an agreement be reached, a scenic resort at Mount Kumgang is likely to be chosen as a venue for the event.