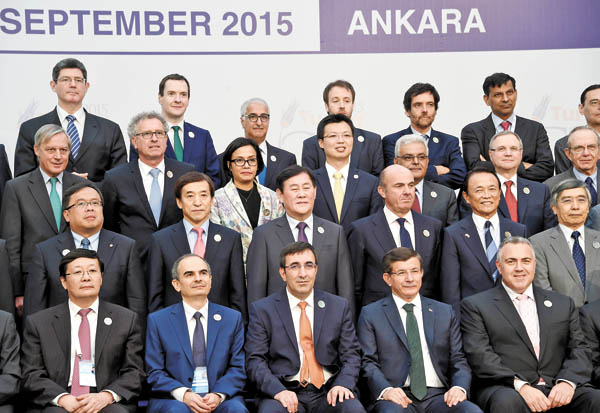 Korean Finance Minister Choi Kyung-hwan, third from left in second row, poses during the G-20 Finance Ministers and Central Bank Governors Meeting on Saturday in Ankara, Turkey. Provided by the Ministry of Strategy and Finance

Finance ministers and central bank governors across the world agreed to “carefully calibrate and clearly communicate” monetary policies with only a short time left before the United States may raise interest rates.

At the G-20 Finance Ministers and Central Bank Governors Meeting on Friday and Saturday in Ankara, Turkey, policymakers from leading economies reached a consensus on a broad range of global economic issues, from cooperating on monetary policies to boosting investments and job creation.

“We will carefully calibrate and clearly communicate our actions, especially against the backdrop of major monetary and other policy decisions, to minimize negative spillovers, mitigate uncertainty and promote transparency,” the English-language communique, posted on the G-20’s website, read.

The declaration came as the U.S. Federal Reserve prepares for a meeting of its Federal Open Meeting Committee on Sept. 16 and 17, spurring worries in emerging markets that a U.S. rate increase - the first in nine years - will prompt an exodus of capital from their countries.

The communique effectively pointed out the possibility of a rate increase in the U.S., saying “monetary policy tightening is more likely in some advanced economies.”

Following some countries’ expansionary monetary policies, such as Japan’s and China’s, the G-20 representatives pledged to avoid “competitive devaluations” to boost their own exports.

Korean Finance Minister Choi Kyung-hwan tried to dissuade U.S. policymakers from raising interest rates for the sake of the global economy, according to a press release by the Ministry of Strategy and Finance on Sunday.

At the meeting, Choi stressed “the U.S. Fed should be cautious in deciding the timing and speed of the rate increase” to ease volatility in the global economy, the Finance Ministry said. He also urged G-20 member countries to “prevent small fires from developing into big fires” in global financial markets.

Choi also said he met with Stanley Fischer, vice chair of the U.S. Fed, on the sidelines of the meeting.

“I got the impression that the United States will raise the rate sometime in the future, but it will be done at a slow and cautious pace,” he said in a meeting with Korean reporters in Ankara. “There is a perception that if the U.S. rate rises, other countries, including Korea, should follow, but it is not always like that.”