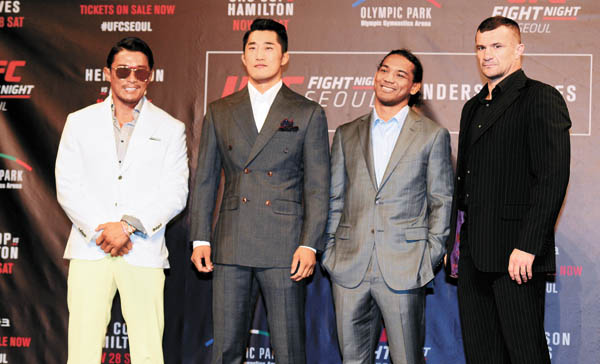 The Ultimate Fighting Championship (UFC) is coming to Korea for the first time, and the world’s top-ranked fighters vow to deliver a knockout performance for local fans.

“UFC is one of the fastest growing sport organizations in history,” said Kenneth Berger, UFC executive vice president and general manager of the Asia division, in Seoul on Tuesday. “I firmly believe it’s just a matter of the time before we see an Asian UFC champion, possibly a Korean champion. You can expect a lot more of UFC here.”

Berger said that he knows about Korea’s UFC fan base and is excited to see the event finally land in Korea.

“In order to host the event in big cities like Seoul, there are lots of issues to consider, regarding venues, marketing, sponsors. Lots of pieces had to come together,” he said.

The main headline bout is between former lightweight champion Benson Henderson, who is born to a U.S. father and a Korean mother, and Brazilian fighter Thiago Alves in a five-round welterweight challenge.

“My mom, wife and my son, and my mom’s relatives, will see this event,” said Henderson, who has a 22-win and five-loss record. “I want to get tickets for all of them to watch me fight.”

Filipovic, the 40-year-old Croatian who is known for his formidable high kick, still holds the second-best rating for the mixed martial arts match in Korean television history. When the former Croatian Special Forces law enforcement officer fought Russian rival Fedor Emelianenko in the now-defunct Japanese MMA organization in 2005, it got 6.033 percent of viewers’ ratings, a surprising amount considering that it was broadcast on a cable channel.

“I know I have a huge fan base in Korea,” Filipovic said. “I previously fought in Korea in 1996 - it was a small city called Iksan. But professionally, I’ve never fought in Korea and I’m glad to be part of the UFC Fight Night Seoul.”

Another event involves Kim Dong-hyun, a decorated Korean fighter in the UFC who has recorded 20 wins, three losses and one draw. Nicknamed “Stun Gun,” the 33-year-old takes on Jorge Masvidal in the welterweight division.

“I’ve been fighting in Korea for 10 years, but I never thought this kind of event would happen here,” Kim said. “I want to show a hot performance to local fans, but since my family and relatives will be all there, I will first try to focus of getting a victory.”

Choo Sung-hoon (Yoshihiro Akiyama) is also returning to the octagonal ring for the first time since he beat American Amir Sadollah in 2014. The 40-year-old Korean-Japanese will fight against Alberto Mina in a welterweight bout. Mina, the 33-year-old Brazilian, is 11-0-0 so far in his UFC career.

Choo, former judoka who won the 2002 Asian Games, has become a celebrity in Korea, especially appearing on entertainment show Happy Sunday’s “The Return of Superman” segment with his daughter. But he said that the image he portrays on television will be different from his performance in the octagon.

“People in Korea know me as a good father through television,” he said. “That’s good, but UFC fighting is what I used to do, and I want to deliver my best performance for fans.”

The UFC said five Korean fighters are confirmed to feature at the inaugural Seoul event in November.

In a featherweight bout, Choi Doo-ho, who is on a 10-win streak, takes on American Sam Sicilia, while Nam Yui-chul takes on another American fighter, Mike De La Torre.

In the lightweight division, Bang Tae-hyun will battle Leo Kuntz, while in middleweight, Yang Dong-I makes a comeback to the UFC after a three-year hiatus to fight Jake Collier. Lim Hyun-gyu will take on Brazilian Elizeu Zaleski dos Santos in a welterweight bout.