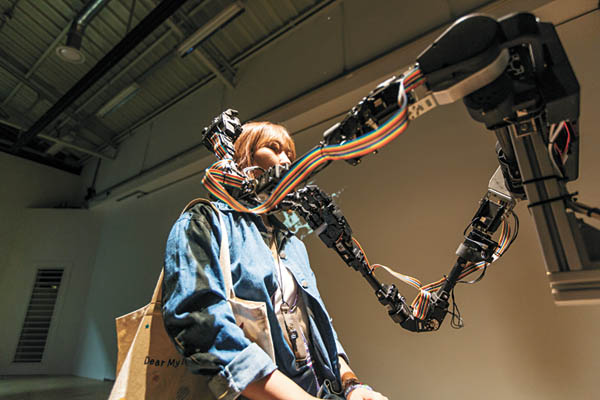 At the Seoul Art Space Geumcheon - a remodeled printing factory in southwestern Seoul - there is a robot that delicately touches visitors’ faces, in the manner that blind people do to recognize someone, and generates visual renderings.

“Blind Robot” by Canadian artist Louis-Philippe Demers is among the works now on display at the Da Vinci Creative 2015, an annual new media art festival that kicked off Thursday.

The festival, held by the Seoul Foundation for Arts and Culture (SFAC), includes not only the exhibition but also lectures by some of the 15 participating artists.

“We should seek the driving force for new media art not in new technology, but constantly in our own creative abilities with which the curiosity from the inside can be transformed into a wonder,” said Choi Doo-eun, curator of the show. “So the theme of this year’s edition is ‘Sense of Wonder.’”

Among the exhibits, “Running Women” by Korean artist Yang Minha is video footage of a woman’s legs in motion produced by thousands of motion vectors created by applied algorithmic calculations.

“Sentimentail” is an interactive sound piece by Korean artist duo Code Blue. Visitors can sit and play the installed piano, which mixes alcohol into a cocktail according to what keys they press. The combination of emotions from the piano playing and flavors from the cocktails add a complex dimension to this shared sound experience.

Admission is free. The festival runs through Sept. 30 but is closed during the Chuseok holiday from Sept. 26 to 29. Go to Doksan Station, line No. 1, exit 1, and walk for 10 minutes. For details, visit www.davincicreative.org.