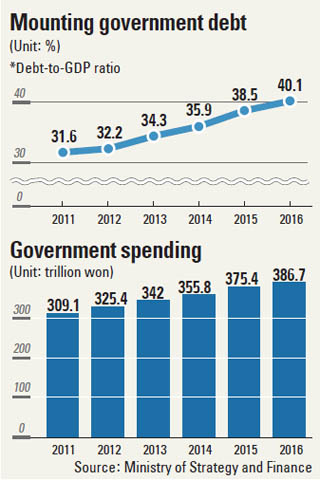 The government’s debt-to-gross domestic product ratio will surpass 40 percent for the first time in 2016, as the government continues an expansionary fiscal policy to keep the economy growing even when faced with another tax shortfall.

Under the budget plan released by the Ministry of Strategy and Finance on Tuesday, Korea’s sovereign debt will surge by 50 trillion won ($41 billion) in 2016 to 645.2 trillion won, which will lead to a 40.1 percent debt-to-GDP ratio.

Under the plan, total revenues will rise only 2.4 percent from this year to 391.5 trillion won, smaller than the growth in spending.

This will not translate into a budget surplus, however, because revenue includes profits from state-run companies and state-run pension and employment insurance investments. They cannot be applied to government spending.

In 2016, revenue excluding tax collection is expected to be 168.4 trillion won. Not all are prevented from being included in expenditure.

Despite the low increase in spending, the government called the budget plan “expansionary.”

“Given various figures, such as the rising fiscal deficits as spending is more than revenue, we can say the plan is a bit expansionary,” Vice Finance Minister Bang Moon-kyu said at a briefing. “Particularly, including a supplementary budget to be implemented next year, the total growth in spending will be 5.5 percent.”

Although Bang said he apologized to the public for a 40 percent debt ratio, it was inevitable for Asia’s fourth-largest economy as it deals with the sluggish global economy.

“The overall growth rate for the global economy is falling, so we need an expansionary policy to cope with that,” he said. “While other countries are supporting their economies with expansionary policies, we can’t avoid that simply because of worries over the fiscal deficit. It is difficult to maintain the debt-to-GDP ratio at the 30 percent level.”

Since last year, the Finance Ministry has pledged to maintain the government’s debt-to-GDP ratio below 40 percent to maintain fiscal soundness. At the same time, it continued an expansionary fiscal policy through a variety of means, such as a 26 trillion won stimulus package last July and an 11.5 trillion won supplementary budget after the outbreak of Middle East respiratory syndrome.

The increase in government debt is based on a “conservative” outlook for economic growth, Finance Minister Choi Kyung-hwan said, which would lead to a drop in tax revenues.

“The biggest reason for the mounting debt is because we applied a very conservative forecast for tax revenues and economic growth so that we would not face a shortfall in tax revenues next year,” Choi said at a briefing on Monday in advance of the release of the plan. “Every year, we had a sort of rosy outlook for the economy, but when we calculate the figures at the end of the year, we found the fiscal balance worsened. So to avoid that kind of situation next year, we started with a conservative outlook.”

The ministry said the budget plan was based on the recent cut in its forecast for 2016 economic growth to 3.3 percent from 3.5 percent.

A 40 percent government debt-to-GDP is the maximum ceiling for policy makers in budget planning, officials said.

“A 40 percent ratio is quite sound considering the situation in other developed countries, where some ratios rose to 110 percent in the wake of the 2008 global financial crisis,” a high-ranking Finance Ministry official told reporters in August. “Given that average debt-to-GDP ratios in developed countries are around 60 percent, the 40 percent ratio is considered a ceiling for us because we should worry about potential demand for unification and welfare, which we assume will boost us an extra 20 percent in the future.” 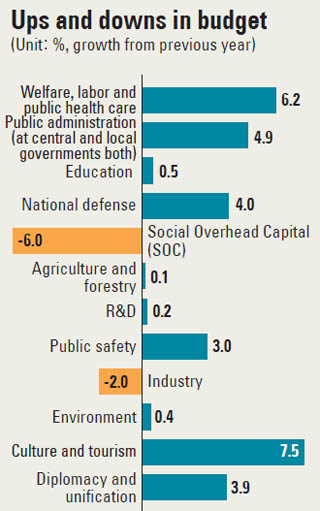 The biggest increase in the budget was for job creation for young people, by 21 percent from this year. Overall spending for social welfare, the labor market and public health rose 6.2 percent to 122.9 trillion won, accounting for the biggest part of the budget, about 30 percent.

The monthly wage for a South Korean conscripted solider will grow 15 percent to 178,000 won. The increase in the defense budget will help create “an advanced culture for army life,” the government said, following a string of soldiers committing suicide after being bullied by their fellow soldiers.

Culture and tourism also saw a hike in the budget by 7.5 percent, the highest growth ever.

Among 12 sectors, two will see their budgets cut: spending on so-called “social overhead capital (SOC),” which builds social infrastructure such as bridges and roads, which will fall 6 percent; and support for industry, such as SMEs and energy companies, which will fall by 2 percent.

The cut in SOC projects effectively rebuffed calls from politicians preparing to run in next year’s elections, who wanted more spending in their constituencies.

“[The Finance Ministry] gave up its role in fiscal policy,” Lee Jong-kul, a lawmaker from the New Politics Alliance for Democracy, said at a briefing. “The lowest-ever growth in spending, the highest-ever debt-to-GDP ratio prove it.”