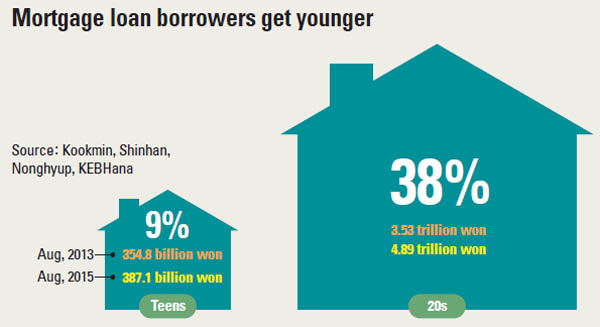 Younger people are emerging as the major borrowers in the home mortgage market.

Analysis of mortgage loan data by age groups from four major banks - Kookmin, Shinhan, Nonghyup and KEB Hana - shows loans issued to people in their 20s and 30s grew by 28 percent over a two-year period from August 2013 to August this year.

The growing numbers are driven by young people who are opting to buy their homes as they are finding it more difficult to manage a jeonse (lump-sum deposit) deal.

Chang, a 32-year-old office worker, is typical of the group. He is living in a double-income household and recently bought a 105.8-square meter (1138.8-square foot) apartment in southwestern Seoul that the family used to rent on jeonse.

With children growing up, moving around has become too big of a hassle for Chang, and the jeonse price, around 350 million won, has neared the sale price. He decided to buy his home and went to his primary bank for a mortgage loan.

For an apartment with an estimated value of 400 million won, with an actual sale price range of around 430 million to 450 million won, he was able to get a 280 million won deal, or 70 percent of the house’s value.

The interest rate was also relatively low in the high-2 percent to low-3 percent range. Over 30 years, he makes payments of 1 million won per month, including interest and principal.

“Finding an available jeonse is as hard as picking stars from the sky, and semi-jeonse lease contracts require 1 million won monthly rents over the security deposit of 100 million won,” Chang said. “I thought it would be better to pay off the mortgage interests with that kind of money.”

Even if home prices fall, he feels it is better than having to move from one jeonse to another for many years, and paying higher jeonse and wolse (monthly rent).

“Even if the home price was to fall to 90 percent of the current value over the next 10-year period, I am still better off than paying wolse for the next 10 years,” Chang said.

And there are many more people in the same age group as Chang who are deciding to become home owners.

This is steep growth compared with the 10 percent loan value growth issued to people in their 40s, who have traditionally been the major buyers.

In the new home pre-sale market, consumers in their 20s and 30s have also become primary buyers.

In July pre-sales at Wangsimni Xi, being built by GS Engineering & Construction in northern Seoul, nearly 47 percent of the buyers were in their 20s and 30s. Just over 24 percent were in their 40s and 22 percent in their 50s.

In the pre-sale of Daewoo Engineering & Construction’s Ansan Central Prugio in Gyeonggi and Daelim apartment in Boryeong, South Chungcheong, more than 30 percent of the people who signed the contract were in their 20s and 30s.

“Just last year, people in their 40s and 50s were major buyers in the pre-sale market, but this has changed this year,” said Shin Byeong-cheol, a senior official in charge of pre-sales with GS Engineering & Construction. “People in their 20s and 30s, who used to account for around 20 percent of the total contracts, now account for as much as 40 percent in some sales.”

However, the change is not without concerns. “Younger people who used to live in jeonse houses are buying new homes with mortgages,” said Kim Duk-rye, a researcher at the Korea Housing Institute. “If the mortgage amount is overwhelmingly bigger than their incomes, they may face difficulties making payments when interest rates rise for instance.”

Experts say younger people may be less inclined to buy new homes at pre-sale markets after next year.

“From next year, new lending rules that require installment payments of principals will be implemented. This will probably dampen demand from younger people who may find principal payments burdensome,” said Lee Nam-soo, a senior real estate analyst at Shinhan Investment.

Mortgage payment schemes that require only interest payments for the first few years are popular.

There are also worries that young buyers may be purchasing properties at peak prices.

“There is a higher possibility of housing price falls and an interest rate hike [in the near future].

“If and when external economic and financial conditions deteriorate, housing prices could plunge,” said Kim Ji-seop, a researcher at the Korea Development Institute. “One should consider such a scenario when setting up their loan scheme.”