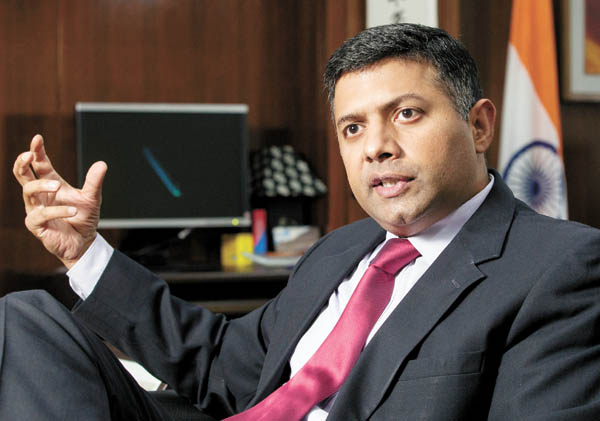 Vikram Doraiswami, the new Indian ambassador to Korea, speaks with the Korea JoongAng Daily on Aug. 31 at the Indian Embassy in Seoul. By Park Sang-moon

When Vikram Doraiswami was named the new Indian ambassador to Korea, he recalls feeling “surprised and delighted” - surprised that he would be working in one of the most desired posts among his fellow diplomats at such an early stage in his career, and delighted to finally come in contact with a place with which he had so long been acquainted.

The only ambassadorial experience he had before arriving in Seoul on April 13 was four months in Tashkent, Uzbekistan. But the top envoy’s experience with South Korea goes as far back as the mid-1990s, when he was posted to the Commission of India in Hong Kong as third secretary.

“I have very old connections with Koreans,” said Doraiswami, 46. “When I first started to learn Chinese over 20 years ago at a language center in Hong Kong, I had a lot of Korean friends.”

He added that he had come to enjoy Korean food - bulgogi (marinated beef), gimbap (rice, meat and vegetable rolls wrapped in seaweed), kimchi jjigae (stew) - in socializing with those classmates, stressing that he was “predisposed” to like Korea, a place that has “so many untapped business areas” when it comes to trade with India.

Trade and economic relations between India and Korea have gained momentum in recent years, due in large part to the signing of the Comprehensive Economic Partnership Agreement (CEPA), which went into effect in January 2010.

And the commitment to lower or eliminate import tariffs on a wide range of goods over the next eight years has helped both countries expand investments and services.

Total trade between India and Korea jumped from some $12 billion in 2009 to $17.5 billion in 2013, up 45 percent, with the majority of exports from Korea to India, according to data provided by the Indian Embassy. Korea primarily exports auto parts, telecom products and electronics, while India exports ore, aluminum and naphtha.

However, in a recent interview with the Korea JoongAng Daily, Doraiswami was eager to point out that India and Korea’s current status wasn’t enough for such two large economies with so much potential for growth. From personal accounts to business meetings with entrepreneurs, the Indian ambassador outlined how both countries could work toward enhancing economic ties. The following is an edited excerpt:

Q. Having had a basic impression of Korea from your colleagues, what was different when you actually arrived here?

A. I was pleasantly surprised that the modernity of Korea exceeded my expectations. I expected it to be a modern, cutting-edge country - as everyone told me about the quality of the Internet and the excellence of Wi-Fi services - but this turned out to be even better than what I thought.

Aside from technological advancement, were there any other surprises?

The capacity to find appropriate solutions - everything from the thoughtfulness of this country to the little details. Let me give you an example. Some days ago, I was at a shop that sold popsicle Gelato, and they gave me this little cardboard holder through which you stick your popsicle so that the dessert doesn’t drip on your hands. A little piece of cardboard doesn’t cost more than maybe 100 won [$0.08], but the cleverness that goes into making something like that for consumers eating ice cream on a warm summer day was like a small tidy gift.

What have you managed to achieve so far at the Indian Embassy?

It has been a very busy year for India-Korea relations. We had the Indian prime minister and defense minister visit, with many more chief ministers planning to arrive pretty soon. In large part, we’ve been trying to simplify procedures that held back political, defense, economic and commercial relationships between both countries.

For instance, to make it easier to travel to India, we’ve suspended biometrics data collection on site, which was causing a lot of inconvenience for Koreans. For people who consider time as money, a half-day delay in their schedules would mean they would think twice about visiting India. So after we removed that, we saw a 10 percent increase in the number of visa applications over the last three months.

We’re planning to launch an annual Indian cultural festival in Korea this year, something that will run for some 20 to 25 days and feature the rich culture of India through music, food, literature and dancing. A Korean cultural event will also kick off in India next year and show that Korea isn’t solely about Hyundai and Samsung and LG, and that it also has a traditional culture that is different from China or Japan or any other part of the world.

On a scale of 1 to 10, how would you grade bilateral trade between India and Korea?

Trade is currently marked at $17 billion and there’s a capacity to easily raise it five to 10 times in the next five to 10 years. So I’d give it a 5 for effort and a 5 for the remainder of its potential to be tapped.

Which specific Korean business sectors do you think have the greatest potential for growth in the Indian market?

Korean automotive component producers are doing so well in the local market, but I think there’s so much room for cooperation between their Indian counterparts because there are a lot of niche components that Korea makes, but India doesn’t. In terms of garments, Korea produces top-quality textiles, and India can provide the raw materials as well as the labor for the finished goods. These are things you can neatly integrate and make a nice value chain for supplying the international market. Other areas of great strength include the electronics industry, specifically semiconductors and other high-end products such as HD screens and organic LED screens - goods that aren’t made in India yet. Research on new materials has long been ongoing in Korea, and I think some of this could have applications in India, everything from military application to civil application.

What strengths does the Indian market possess that Korean businesses have yet to notice?

Gem stones, leather, base chemicals, pharmaceutical products, black tea, coffee, etc. Korea is now one of the world’s top cosmetics producers. India has a lot of great natural products based on traditional medicinal herbs and creams, which many Western countries are actually exploiting for their own beauty markets. The base materials can be taken from India and converted into new products here. Moreover, I think the synergy between the Indian IT industry and Korea’s IT hardware is probably the best in the world, as Korea makes the best IT hardware and we have some of the best IT engineers. So rather than having all the Indian brains go off to work in Silicon Valley, Korea could actually try to attract them to create value in their market for the world.

What Korean success stories can you find in India?

There are about 640 Korean companies in India, and three have done extraordinarily well: Hyundai, Samsung and LG. They’ve succeeded because they actually became part of the Indian market. If you look at their advertisements, they use Indian actors and target Indian festivals for promotion. They also understood what Indian consumers are looking for and have managed to ‘Indian-ize’ their products.

Hyundai Motor, which has grown into the second-largest automobile manufacturer in India after Suzuki, penetrated the Indian market earlier than their competitors. And because they manufactured in India, they were able to establish a price lower than many others. All three major Korean companies came in the 1990s. The last decade hasn’t seen much coming from Korea, though. Now is the time to enter the Indian market, because if you’re in now, you’re in for the next big growth period. If you come in later, it’ll already be too late.

Why is Hyundai Motor falling behind Suzuki in India?

One reason is that Suzuki has a wider range of products available in the Indian market. Hyundai has to beat that strategy. It comes as a shock for every Indian businessman who comes to Korea and gets a ride in my car, a SsangYong Chairman. A while ago, I had that same experience, in which a person from India who was here for business rode in my car and asked whether it was a Mercedes. I said ‘No,’ and he said ‘Well, it looks like one.’

I answered: ‘Oh, it’s even better. At this price, you can’t get a Mercedes with all these features.’

He was really impressed with the ride and asked me why they didn’t sell cars like that in India. I said, ‘Good question. Ask them.’

I think Korean companies should really reconsider their product line because the Indian market is only going to grow.

What are some of the spending trends among Indian consumers that Korean businesses can keep in mind?

Indian consumers are always looking for a bargain, so they won’t go for a brand name only because it’s a brand name. They’re really price sensitive, and the smallest change in price is always seen as an important factor in making a decision. Energy cost is also a sensitive issue. About 25 percent of the average Indian middle-class family’s budget goes toward energy costs: fuel, electricity bills, etc. A more economical product in terms of fuel efficiency matters a lot. The Indian market, however, is also a segmented market, meaning there are rich people who don’t mind throwing away money for any product they like.

What about bilateral trade between Korea and India’s movie industries? Both countries have rising film markets.

Next year at the International Film Festival of India, held annually in Goa, the focus for the first time will be on Korea. This is one of the projects the Indian Embassy in Korea has been working on over the past couple months. Having Korea as a focus is a great opportunity to showcase Korean films, which I think Indian audiences will love because there’s an expectation about the absence of singing and dancing. Korean films are as dramatic as Indian movies, with lots of good guys and bad guys, romance and disapproving families, so I think they fit the Indian character very well. I think the next logical step would be for the Korean film industry to invite Indian directors to shoot scenes here, because that’s the best way to promote tourism.

What’s your personal goal as the Indian ambassador to Korea?

I would love to give a speech entirely in Korean without having to look at my notes.