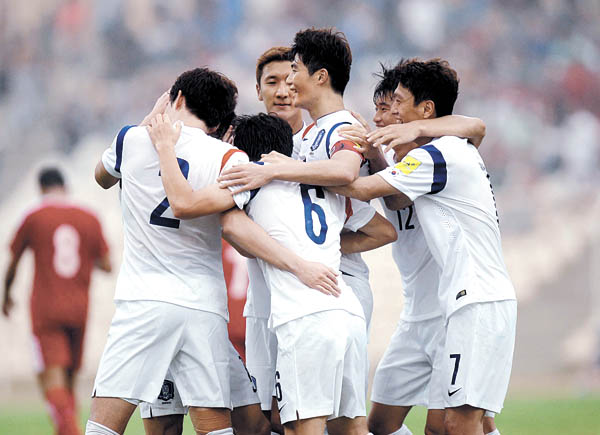 Korea’s national football team celebrates after scoring their third goal against Lebanon on Tuesday in the World Cup qualifiers.[NEWSIS]

With only five international games under his belt, Suwon Samsung Bluewings midfielder Kwon Chang-hoon is rising as the reluctant crown prince of the Korean national football team.

On Tuesday, the 21-year-old scored Korea’s third decisive goal in the 60th minute to seal the team’s 3-0 victory against Lebanon in the 2018 FIFA World Cup second round Asian qualifiers. He was also pivotal in the team’s second goal.

And after scoring two goals in the match against Laos in Korea’s 8-0 victory last week, Kwon is high on the list of manager Uli Stielike’s favorites.

“Kwon is doing more than our expectations,” Stielike said after Tuesday’s match. “He is still a young player, and even if there is a slump afterwards, I believe he will continue to perform better.”

Team captain Ki, who again orchestrated the team’s ball distribution in the center, was also happy about the young player’s rise. “He has been giving energy to the team since the EAFF East Asian Cup,” said the Swansea City midfielder. “If he gains more experience, he will be a big power for our national team.”

Tuesday’s victory for the Taegeuk Warriors at the Saida International Stadium in Sidon, Lebanon, not only solidified Korea at the top of Group G with three straight victories, it was also the nation’s first victory in Lebanon since 1993.

Kwon’s winning goal in the 60th minute was scored from just outside the penalty box after he received a pass from Ki Sung-yueng.

He was also instrumental in the team’s second goal in the 26th minute by dishing a pass to Koo Ja-cheol inside the penalty box. Lebanon defender Walid Ismail tried to stop Koo from shooting, but it led to his own goal.

Korea’s first goal was a penalty kick converted by right back Jang Hyun-soo in the 20th minute.

Kwon, who made his pro debut after graduating Maetan High School in 2013, was humble about his form.

“It wasn’t me, but the whole team, that played well to get the victory,” Kwon said. “I heard playing in Lebanon is very difficult, but I had senior players who had experienced the situation. They told me to play with confidence, and that helped me.”

But the Suwon midfielder, who has seven goals in 26 matches in the K-League Classic, acknowledged he is growing with the national team.

“When I play with the national team, I feel something is different from playing in the league,” he said. “When I go to my club, I will show a better performance.”

The men’s national team will return to Korea on Thursday.