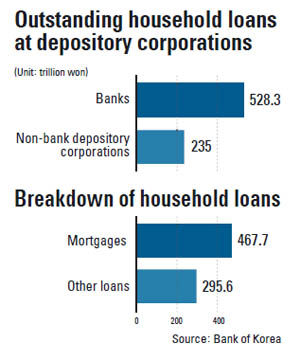 Outstanding household debt issued by depository corporations including commercial and nonbank depository firms has increased by 3.3 trillion won ($2.77 billion) to 763.3 trillion won, the Bank of Korea data showed on Wednesday.

In terms of the types of loan issuer, banks saw an increase of 1.1 trillion won in household loans to 528.3 trillion won, and nonbank depository companies like credit unions or the post office, 2.2 trillion won to 235 trillion won.

When counting mortgages handled by the Korea Land & Housing Corporation, mortgages accounted for two-thirds of the total household debt.

Home sales in July were 110,675, up 43.2 percent year-on-year, according to recent Ministry of Land, Infrastructure and Transport data. Home sales in Seoul, where expensive residences are clustered, saw a 101.3 percent increase compared with a year before to 21,382.