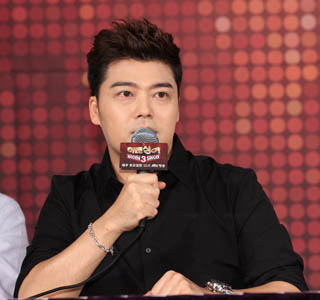 Former anchor and entertainer Jun Hyun-moo has been confirmed to be joining the popular KBS 2TV reality program “Happy Together 3” as one of the main hosts.

Jun’s participation in the variety program along with the current regular hosts Yoo Jae-suk and Park Myung-soo is expected to create a synergy effect in raising viewership of the program, which has been performing poorly in recent months.

“[Jun] and Park’s chemistry is expected. They will probably hold each other in check, which will entail conflict,” said the program’s chief producer Kim Kwang-soo. “And that will be fun.”

In addition to “Happy Together 3,” Jun is also scheduled to take part in KBS’s pilot reality program that will air during the Chuseok holiday from Sept. 26 to 29.

Jun’s return to KBS is of huge significance, as it is his first comeback to the broadcasting channel after he resigned from KBS in September 2012. Although the 37-year-old has been actively performing on cable channels and other major terrestrial channels, he couldn’t appear on KBS because the company ruled that anchors who resign can’t appear on its programs for three years.