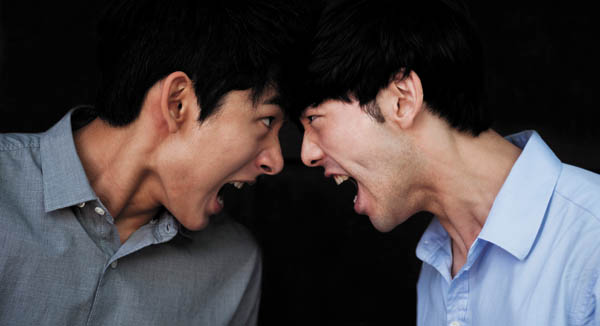 Seo Young-ju, left, and Nam Yoon-ho, have been double cast as Alan for the play “Equus” that is being staged at the Chungmu Art Center in central Seoul. By Jeon Ho-seong

There are only a handful of plays that can stand the test of time. That’s because theaters stage plays based on the premise that the audience always desires something new. Except for the monumental classics like Greek tragedies and Shakespearean masterpieces, there have been very few modern works by foreign playwrights that became part of the repertoires of theater companies in Korea.

But the play “Equus,” which is celebrating the 40th anniversary since its Korean premiere this year, is an exception. Ever since its premiere in 1975 as an “experimental play” by a local theater company, “Equus” has been staged regularly for the Korean audience once every two to three years at various venues across the country. The latest show began its run last week at Chungmu Art Hall in central Seoul.

Written by Peter Shaffer in 1973, the play that tells a story of a psychiatrist who attempts to treat a teenager with a pathological religious fascination with horses, has become one of the most popular works of theater in the world. Shaffer is said to have been inspired to write “Equus” after hearing a crime story about a teenage boy who blinded six horses in a small town in England. Without learning about the details of the crime, Shaffer went on to write a fictional account of what might have caused the incident and turned it into somewhat of a detective story involving Dr. Martin Dysart, a psychiatrist, trying to understand the cause of the young Alan’s actions. After premiering in London in 1973, the show went to Broadway in 1975 and starred famous actors such as Anthony Hopkins as Dr. Dysart and Tom Hulce as Alan.

Over the past 40 years, Korean actors who played the role of the troubled 17-year-old Alan, including Kang Tae-ki, Song Seung-hwan, Choi Jae-sung, Choi Min-sik and Cho Jae-hyun, have since risen to stardom, becoming known as veteran actors representing the local theatrical circle. The two young actors who have been double cast as Alan for this year’s 40th anniversary performance, already appear to stand out from the bunch. One of them is Nam Yoon-ho, 31, who came into the spotlight in the theater world only this year after appearing in Shakespeare’s “Pericles,” produced by the Seoul Arts Center, together with his father, Yu In-chon, an actor and former culture minister. Then there’s 17-year-old Seo Young-ju, who has been garnering much attention for becoming the youngest Alan.

Although the two actors play the same character, the two express a totally different Alan.

Seo, who is playing a character of the same age, leads the life of a real 17-year-old, worrying about the upcoming exam at school. He received the Best Actor Award at the Tokyo International Film Festival for his role in the film “Juvenile Offender” (2012), becoming not only the first Korean actor but also the youngest actor to take home the prize. His acting has also been recognized in filmmaker Kim Ki-duk’s “Moebius” (2013). But the young actor is modest, saying in an interview that he was “all tensed up” since “Equus” is his first stage play.

Meanwhile, Nam, despite being 14 years older than Seo, has a young enough appearance, and the two are even mistaken for friends of the same age. Although he calls himself a rookie for having only three years of experience as a stage actor, Nam has been acclaimed for his deep level of understanding of characters and confidence on stage. While the story line is the same, the two actors depict such different Alans that local theater aficionados say they have no choice but to see the play twice.

Before the show’s two-month run kicked off on Sept. 4, the JoongAng Sunday met with the two actors for an interview. Below are some excerpts.

Q. The character of Alan is known to be very difficult as he is depicted as a strange boy who sees the horses as representative of God and at one point confuses his adoration of his “God” with sexual attraction. How did you find the courage to take on such a role? 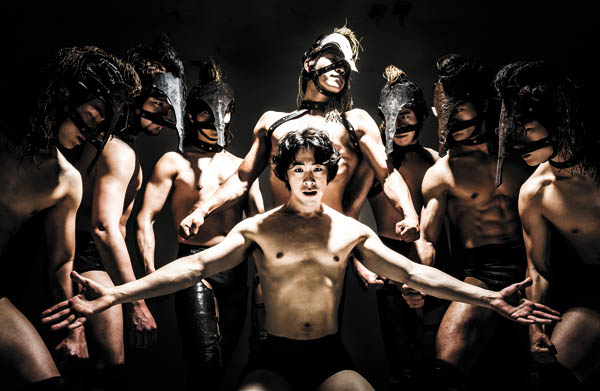 Nam, center, playing Alan in “Equus.” Nam surprised theatergoers when it was revealed early this year that he is the son of actor and former Culture Minister Yu In-chon. Provided by the organizer

A. Seo: I didn’t need courage but longed for the role and the opportunity came. In fact, the auditions for the role were only open to actors in their 20s and 30s, but I’ve been telling people in the theatrical circle carefully that I want to have a go at the role. At the last moment, I received a call from the production team saying that they want to audition me. I am so thankful that I was picked and I am being strong to do my best to repay the honor.

Nam: If you are an actor, you would want to play the role of Alan at least once in your career. I was lucky to have the opportunity and I am trying to do my best. Since all the other cast members in other roles have played their characters before for previous productions, we are very busy trying to keep up with them.

Alan seems to be a boy who is very mentally unstable. What’s the charm?

Seo: Everyone thinks he is mentally unstable, but in my perspective he is just an innocent boy in his adolescence. He is in fact a boy who has scars in his heart and I believe most people, if they were in his shoes, would probably act the same way.

Nam: The passion that an actor can show on stage through Alan is very detailed. Alan goes through very rapid emotional changes, has some kind of duplicity, and the actor playing the role has to manage that while skillfully presenting it on stage as the story jumps from the past and the present. That is why many actors want to challenge themselves and take on the role. That’s the charm of Alan.

Alan loves the horses as his “God” but at one point, he challenges it. Can you sympathize with this psychology?

Nam: Of course it’s not easy to sympathize. But as an actor, you have to get as close to the feelings of the character so I try to bring in similar experiences or feelings to fit them together with Alan’s feelings like a puzzle. I don’t think I will understand Alan 100 percent even on stage, but I will try to until the final show to fill the gap.

Alan also seems like a very innocent boy who follows a primitive instinct. Do you think you still have such a characteristic in you?

Nam: In fact, as I play Alan, I feel like I am quite stained by this society. When I did “Romeo and Juliet,” I had to show pure and unconditional love, but I found myself thinking about why the young couple fell in love in the first place. I find myself expressing the feelings of an adult while playing Alan as well. I should really work on searching for the purity left in me. In comparison, Young-ju is a lot younger than I am and he is only a high school student, perhaps without a real experience of love, I guess it is difficult for me to catch up with his innocence (chuckles).

Seo: I am not pure at all (chuckles). But because I am taking the role of someone who is the same age as I am, I finally feel like I am really a teenage boy.

Last year, “Equus” made headlines for showing Alan stark naked in the Korean production in an attempt to show the genuine recovery of a human being without any pretense or hypocrisy. Since Seo is still a minor, the level of exposure has been adjusted to wearing underwear. Do you feel relieved?

Seo: I didn’t worry about being stark naked on stage at all. Because that is not something that’s obscene but a scene to show Alan’s sense of freedom and his feeling of liberation. It sounds indecent because you call it “nakedness” but it is not like that. I have to wear underwear because of my age, but I think the scene of Alan becoming stark naked is necessary. In order to make love, you have to be naked. I feel sorry for those who come to see my show actually. It’s because of my age they may not be able to get fully immersed in the show. But I am trying to show his freedom and liberation despite wearing underpants.

Nam: For the play, the scene is necessary. Like Adam and Eve when they were naked, this scene is quite religiously significant. I will be stark naked and I have set aside myself and will try to show what I’ve got (chuckles).

What do you think is the attraction behind “Equus” that it has been able to be staged in Korea for the past 40 years?

Seo: Watching Alan is amazing as an audience member, but Dr. Dysart is also quite amazing. Moreover, it is fun to watch different casts.

Nam: That’s right. The two actors who have been double cast for Dr. Dysart will perform totally different shows as well. But above all, I think the force that attracts audiences is the power of the work. People come to see this play and have time to look back at themselves.