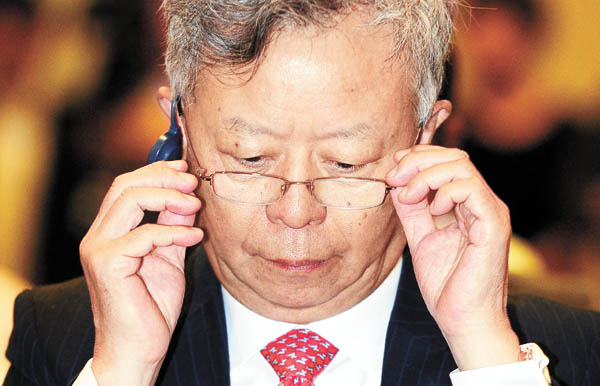 Jin Liqun, president-elect of the China-led Asian Infrastructure Investment Bank (AIIB), said he welcomes the participation of Korean companies in the newly launched multilateral financial institution’s projects, during his first visit to a member country of the bank since his appointment.

At a meeting with South Korean businessmen at the Korea Chamber of Commerce and Industry on Wednesday, Jin said, “We are very optimistic in Korean companies’ infrastructure investment in other parts of Asia. We now see high-level infrastructure in Korea. Your experiences are valuable.”

His visit drew attention from local businessmen and officials as it was his first official trip to Korea, one of the 57 founding members of the bank, since he was appointed president-elect. His inauguration is expected to take place when the AIIB begins operations at the end of this year or early 2016.

Many Korean businessmen - from a broad range of industries, such as transport, brokerage, harbor construction and railways - met the head of the bank, which has $100 billion in authorized capital.

When a businessman from the railway construction sector asked him if there is any possibility of a Korean company participating in bank-led projects, Jin said projects will include a wide range of sectors.

“But the AIIB will have a balanced program in all sectors, from energy, power, transport and even irrigation structure.”

He added, “We are waiting for other countries to join,” he said. “We are sure to have more than 70 countries for the bank being a truly international institution.

“The AIIB membership should be open to members from the World Bank or ADB [Asian Development Bank].

“We reach out to all potential members of the AIIB. We have a round of discussions with Japanese and U.S. authorities for cooperation,” he said. “We will continue to have a dialogue.”

Later, Jin met with the Korean President Park Geun-hye at the Blue House.

Park told Jin she will push for setting up a North Asia development bank with the global community once North Korea gives up its nuclear program, according to the Blue House.