Company grows from family kitchen to forefront of beauty business

Company grows from family kitchen to forefront of beauty business

The drive behind AmorePacific - the country’s largest beauty company which is on the Forbes list of the World’s Most Innovative Companies - began in a small kitchen, where a woman literally cooked up camellia oil to sell as a hair treatment.

Yun Dok-jeong, the mother of company founder Suh Sung-whan, began the family business in 1932 in
Gaesong.

Since glossy, dark black hair was regarded as an important beauty element, demand in hair oil was high. 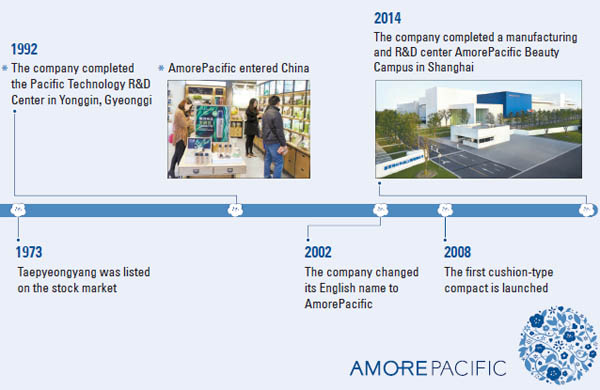 Suh Sung-whan, the second son, picked up the manufacturing and trading skills from his mother.

He founded cosmetics company Taepyeongyang, the root company of AmorePacific, in 1945 in Gaesong, where his mother ran the business.

He took the name, meaning Pacific Ocean, because the founder aspired to take the company beyond the Asia Pacific continent.

Despite the ambitious goal, there was no such thing as a factory and R&D center at a time when Korea was suffering from poverty, with its fate arbitrarily determined by other more powerful countries.

Unfazed by unfavorable conditions, however, he traveled back and forth between Gaesong and Seoul in an effort to obtain great natural ingredients.

One of the breakthrough moments occurred in 1951 when he was forced to move to southernmost Busan in the wake of the Korean War.

There, he developed the country’s first hair pomade called ABC Pomade, which took off among younger men.

The focus on hair products reflects the founder’s will to emulate his mother’s success, which was built on the sale of camellia oil.

In 1954, Taepyeongyang built a small laboratory in Huam-dong in Seoul’s Yongsan District, the first of its kind in Korea.

The company went on to build its first factory in Yeongdeungpo, western Seoul, to mass produce cosmetic products in 1962.

The cosmetics maker changed its corporate name into AmorePacific in 2006. It started rolling out different cosmetic brands targeting diverse consumer bases, from Laneige and IOPE to HERA and Mamonde in the 1990s and 2000s.

Entering the 21st century, it introduced a set of new, more accessible brands, Innisfree and Etude House for younger consumers.

Of more than 30 brand lineups, Sulwhasoo is considered the crown jewel. The premium brand, which uses herbal extracts, also reflects the founder’s pursuit of natural substances and “Asian beauty.”

AmorePacific underwent a significant development phase in 2008 when it opened a whole new category of cosmetics with its air-cushion foundation.

Previously, different foundations were applied for different uses, but the air-cushion combines various functions in a single product. This includes not only the makeup base, but also whitening and sunblock.

Most brands under AmorePacific now adopt the technology, launching their own variants of cushion compacts.

The air-cushion compact proved to have a global appeal, too, and it is now available in Singapore, Malaysia, Thailand, Vietnam and Hong Kong. L’oreal’s Lancome followed suit by releasing its own version of air cushion earlier this year, and AmorePacific signed a memorandum of understanding with Christian Dior, giving the rights to use the cushion technology.

CEO Suh Kyung-bae, the youngest son of the founder, stressed the next growth engine lies in global markets, especially China. It entered the Chinese market in the late 1990s and has increased its presence ever since.

The cosmetics company opened a new production facility and research center last year after dismantling an old factory in Shanghai and another in Shenyang.

Five Amore brands - Sulwhasoo, Laneige, Mamonde, Etude and Innisfree - are currently sold in the world’s second-largest economy, registering an average 30 percent sales growth annually during the past five years. There are now more than 2,900 Amore stores in China.

The new facility, the company said, is intended to keep up with growing demand by Chinese consumers and centralize resources to strengthen its foothold in the Chinese market and other Asian markets, such as Singapore and Malaysia.

The CEO said the new facility will boost the company’s global sales to 50 percent of its entire sales by 2020.