Moon gambles his job on reforms

Moon gambles his job on reforms 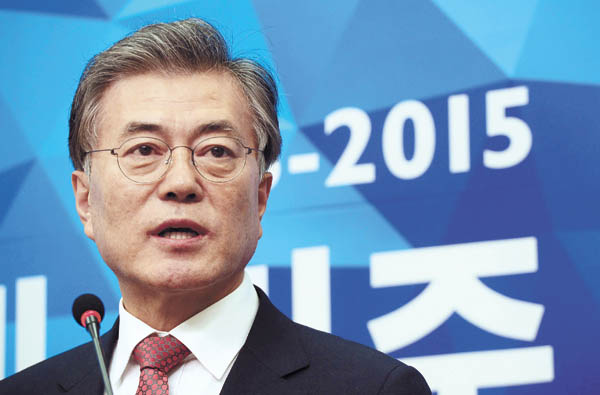 Moon Jae-in, chairman of the main opposition New Politics Alliance for Democracy, announces at a press conference in the National Assembly on Wednesday that he will step down from the party chairmanship if proposed nomination reforms fail or if he loses a no-confidence vote.[NEWSIS]

The leader of Korea’s main opposition party staked his job on a reform of the way the party picks candidates for next year’s general election, vowing to step down if fellow party members succeed in derailing the plan.

Moon Jae-in, chairman of the New Politics Alliance for Democracy (NPAD), also said he would hold a vote of confidence in his leadership at an unspecified time and will step down if he loses it.

The unexpected declaration by Moon, the first-term lawmaker and a failed candidate for president in the 2012 race, came as the NPAD faced escalating internal strife that has raised the prospect of a split into two.

“If the nomination proposals do not get passed, I will resign from the chairmanship,” said a somber Moon during a hastily arranged press conference at the National Assembly on Wednesday. 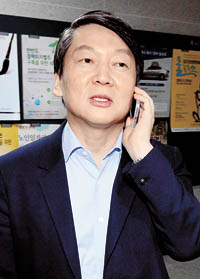 Rep. Ahn Cheol-soo talks over the phone on Wednesday while walking out of his office in the National Assembly.[NEWSIS]

He also said he would step down if he loses a vote of confidence held by the party. When and how the vote of confidence will be held has not been determined, but a polling of both party members and the general public has been proposed.

“It is me who must take responsibility should reforms fail to take place,” Moon added. He said that while the proposals drawn up by the party’s reform committee to change the nomination system may not solve all the problems facing the party, the reform committee did its best, and carrying out its proposals was a start in reforms of the party.

Moon’s gambling of his political future came two days after its reform committee, headed by Kim Sang-kon, unveiled an overhaul of the nomination system for the general election next April.

Party insiders who are not members of the so-called pro-Roh Moo-hyun faction led by Moon have opposed the reforms, claiming they are designed to favor pro-Roh faction members and solidify Moon’s power. Rep. Ahn Cheol-soo, a first-term lawmaker, former software tycoon and Moon’s opposition rival in the 2012 presidential race, criticized the reforms and called the committee that drafted them “a failure,” a direct attack on Moon’s leadership.

If the reform proposals are rejected by the NPAD central committee next Wednesday, Moon is expected to immediately step down and suffer a huge blow to his political career. The confidence vote would not be necessary in that case.

Analysts speculate that Moon is risking his position because he will not be able to run the party through the general election if rising discontent by non-Roh faction members is not quelled.

Under the nomination overhaul proposals drawn up by the reform committee, the NPAD will introduce a public panel of 300 to 1,000 people for each constituency to select the NPAD candidate. The NPAD will create the panels in advance by receiving applications from the public. The reform committee also offered giving extra points to political rookies, women and the handicapped.

The reforms are widely seen as favoring new faces hoping to go into politics - and putting at a disadvantage party veterans, most of whom are outside the pro-Roh faction and have not been shy about slamming Moon’s stewardship of the party.

In recognition of growing discontent within the party, Moon said those who threatened his authority had gone too far.

“Recent efforts to weaken and split the party have crossed a line,” said Moon in a clear display of dismay at his critics within the NPAD. “Until now, I have endured and endured such efforts for the sake of keeping the party together. I even tried to embrace those who openly talk about dividing the party and creating a new one.”

Moon said there would be no hope for the party if the reforms failed because of efforts to protect “vested interests” by party veterans.

Moon’s fate will be decided next Wednesday when the NPAD’s central committee votes on the reforms.

Moon’s announcement was thought to have been prompted by a one-on-one, 40-minute meeting between independent lawmaker Chun Jung-bae and former software tycoon and academic Ahn earlier in the day. It was rumored that Chun, who is leading a campaign to split the NPAD and create a new opposition party, asked Ahn to join his cause.

Chun has deviated from the pro-Roh faction despite the fact that he was a Minister of Justice in the Roh Moo-hyun government, for which Moon served as presidential chief of staff.

“Moon is just obsessed with the reform measures. But he should first address how the changes will increase the party’s chances for victory in the general election next year,” he said.

Ahn went on to say Moon was obsessing over trivial matters while leaving fundamental problems unaddressed.

While Moon vowed strong leadership during his run for chairmanship in February, he has been under constant attack by opponents in his own party since his election.

Concerted efforts to bring him down have grown since the party’s crushing defeat in the April by-elections this year.