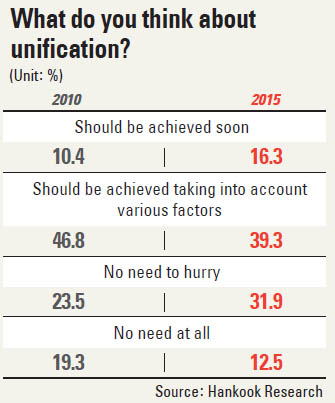 South Korea has turned increasingly conservative toward the North over the past decade, particularly people in their 20s, a poll shows.

To mark the 70th anniversary of Korea’s liberation from Japanese colonial rule and the 50th year of its founding, the JoongAng Ilbo conducted an in-depth survey on the country’s identity.

The Asiatic Research Institute of Korea University and the East Asia Institute drafted the poll in cooperation with the JoongAng Ilbo.

Polling company Hankook Research conducted the survey from June 19 to July 8, polling 1,006 adults nationwide through in-depth, face-to-face interviews. The poll has a 95 percent confidence level with a margin of error of plus or minus 3.1 percentage points.

The survey showed that the South Korean public is increasingly showing negative views toward the North. More people said they do not recognize the legitimacy of the North Korean government than in 2005 and opposed expanding assistance.

Asked about the future of the Kim Jong-un regime, more people now think it will collapse within a few years.

Most South Koreans said the Kim regime would eventually collapse, but it will take time. In 2010, 69.9 percent said so.

This year, 63.2 percent felt that way. When asked about their general sentiments toward the North, multiple responses were allowed. Some 35.6 percent used the term “we” to describe the North, while “brother” was chosen by 43.8 percent, “neighbor” by 43.2 percent, “stranger” by 30.1 percent and “enemy” by 29.8 percent.

Asked about resuming economic assistance to the North, suspended since the sinking of the Cheonan warship in 2010, 56.4 percent said the current status should be maintained, while 10.2 percent said assistance should be expanded.

Indifference to the North has also risen. In 2005, 36.8 percent of respondents said they had no interest in the North or in North Korean people. That number went up to 53.4 percent this year.

Male respondents had a stronger interest in unification than women. According to the poll, 50 percent of female participants said they want unification, while 61.4 percent of men said they desire it.

More than 72 percent said China will be the country that will have the most influence over Korea over the next decade. The United States came second with 13.3 percent, Japan with 7.6 percent and North Korea with 6.3 percent. In the 2005 poll, China was rated with 40.7 percent and the United States 31.3 percent.

The public’s interest in strengthening the Korea-U.S. alliance to check the growing influence of China also grew. Of those polled, 42.9 percent said the alliance must be strengthened.

Analysts, however, said this does not necessarily mean that the public wants the government to make the United States Korea’s top priority in the foreign policy. The public do want a strengthened alliance to balance China’s growing influence and to heighten the South’s deterrence against the North, they said. According to the poll, 64.2 percent said they want balanced diplomacy in the rivalry between the United States and China.