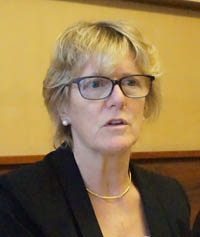 The chief medical officer for England assessed in her first visit to Seoul that Korea did a good job containing the outbreak of Middle East respiratory syndrome (MERS), overcoming difficult circumstances.

Dame Sally Davies expressed her condolences to the Korean public for the 36 patients who died from the potentially fatal respiratory disease, which infected 186 people nationwide from May to July.

“But actually, you did well,” she said. “You had a lower death rate than previously. You contained [MERS] so that it finished in early summer. You should feel good that you contained it because these things are very difficult, as we know.”

Davies sat for a roundtable lunch interview with local media including the Korea JoongAng Daily on Monday on the sidelines of the second Global Health Security Agenda High-Level Meeting, held in Gangnam District, southern Seoul.

Davies is the first female to serve as chief medical officer, a position she has held since 2010, and controls the 1 billion pound ($1.5 million) research budget for NHS England under the British Department of Health.

In 2013, she was named the sixth-most powerful woman in Britain by the BBC. She is also a member of the executive board of the World Health Organization (WHO).

She went on to thank Korea for its support in joining the United Kingdom in global efforts to fight the Ebola epidemic in West Africa. At the beginning of the year, Korea sent 30 Korean doctors, nurses and medical staff trained in the United Kingdom to help eradicate the deadly virus in Sierra Leone.

“By doing that, we’ve managed between us to finish that epidemic and protect those countries,” Davies said. “And Korea and Britain have been hand-in-hand in that. And that’s very important.”

“The Ebola outbreak,” she added, “has proved that infectious diseases do not respect international borders. We must act globally to make sure information is shared, and speedy effective action is taken, to help stop deadly diseases in their tracks.”

During her five-day visit to Seoul, she particularly stressed the importance of health security and spreading global awareness over the dangers of antimicrobial resistance - which can be considered as dangerous as terrorism.

“Tackling the growing problem of antimicrobial resistance is one of the most important issues facing the world today,” said Davies, who is also an emeritus professor at the Imperial College London. “We must all act now if we want to save modern medicine as we know it.”

“The evidence is that the more antibiotics you use, the more resistance follows it. So what we are beginning to see is infections that cannot be treated. In Europe, gonorrhea is going up, and now there are patients who are untreatable.”

No new antibiotics have been in use with patients since 1987, she added.

“The whole of modern medicine is at risk. Before antibiotics, 43 percent died from infections. Now it is 7 percent. The death rate will change.”

Modern medicine, Davies continued, is supported by antibiotics - used in complex surgeries to prevent infections, modern cancer treatment, diabetes, transplant surgery and even for premature births. “So we need to protect the ones we have and develop new ones. And there are not many new ones in the laboratories to be made at the moment because the science is difficult and people have not invested in that area.”

There has also been little development in discovering new antibiotics, she said, because of a “very bad international system of finance to stimulate or incentivize development of antibiotics.”

She added that a normal patent is 20 years, which induces drug companies to oversell antibiotics to pay back the production, which eventually increases resistance and renders the patent irrelevant.

“There is a conflict in the pharmaceutical model with bacterial mutation and the development of resistance, and we have to find a way through that,” she pointed out.

Korea is a big user of antibiotics, Davies added, even though “it does not have more infections than many other countries [due to] very good hygiene, clean water, good sanitation and good cleanliness of people.”

“We don’t have new antibiotics to replace the ones that work. That’s a scary picture, maybe not for the next few years, but I worry for my children and grandchildren that we may not have antibiotics, and that will be a problem.”

A structure like the Songdo-based Green Climate Fund - called the environmental World Bank - in the medical arena, she said, would be a helpful mechanism to raise funds to develop antibodies, pointing to a lack of antibodies currently in development.

“We’re going to need something like that, and we are joining with other countries through the [United Nations] system, through WHO, FAO [Food and Agriculture Organization] and OIE [World Organization for Animal Health],” she said. “We will need a different funding mechanism where all our countries contribute and we pay for milestones. We will have to pay, or otherwise people will die.”

As chief medical officer, she had the British government set an example by listing antimicrobial resistance on the government’s national risk register next to pandemic flu and terrorism.

“Government finance ministries have a role,” she continued. “This is not just a health problem. This is a health and economic problem. In this country, MERS was both a health and an economic, societal problem. It has hit your tourism industry, it has altered how people interact. Antimicrobial resistance is the same, but an even bigger problem.”