Korean Basketball League (KBL) players, coaches and officials bow in apology during their “self-clean” meeting in Seoul on Thursday. The KBL players and officials signed a written pledge to not engage in any illegal activities. [NEWSIS]

The Korean Basketball League’s (KBL) new season tips off on Saturday for another seven-month journey amid a gloomy atmosphere of match-fixing
allegations and an illegal gambling scandal.

While the KBL has come up with interesting rule changes to draw fans, the illegal gambling scandal involving 12 former and active KBL players has had a serious impact on the league in addition to a match-fixing scandal involving former Busan KT Sonicboom coach Jeon Chang-jin.

Although some people have suggested delaying the start of the season due to unprecedented controversies, the KBL has said the new season, which is sponsored by local construction material company KCC, will go ahead as planned.

Ten KBL teams will play a total of 54 games through six rounds in a round-robin system. The top six teams will win through to the playoffs on Feb. 21, 2016. 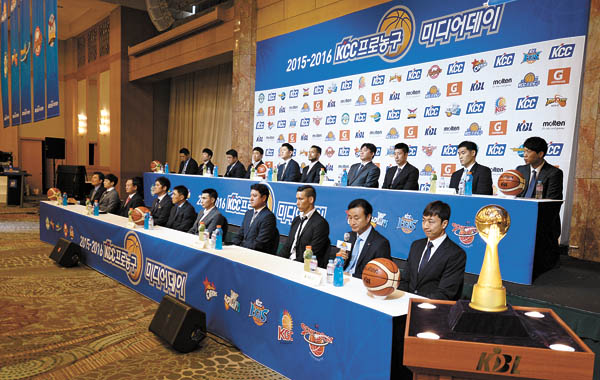 Korean Basketball League (KBL) players and coaches discuss the new season during the media day event in Seoul on Monday. The new season of the KBL starts this Saturday. [NEWSIS]

As the KBL’s image is facing its biggest challenge in its history with off-court legal issues, it is hoping the new season will be a fresh opportunity for the league to regain fans and upgrade its competitiveness.

“We are in a desperate, dangerous situation. Everybody in the KBL needs to recognize the seriousness of the situation and step forward to get rid of the dark and sad cloud around us,” said KBL commissioner Kim Young-ki on Thursday at a meeting of management, players and staff in Seoul. “In this emergency situation, we will use every possible solution to destroy illegal [acts] and evasion of the rules. We will make an honest effort to be evaluated well and get applauded by others.”

For this season, don’t try to find a league game at gymnasiums on Mondays, because there will be no KBL games. Instead, three games will be played on weekends and on holidays, as the KBL tries to concentrate on tightening the schedule.

Fans will also see a new basketball. For the first time, the KBL has adopted the Molten’s GL7X basketball as its official ball. Since the KBL started in 1997, it has been using a basketball made by local brand Star Sports. The Molten basketball is the official ball of the International Basketball Federation (FIBA).

The KBL said referees this season will focus on catching players “flopping,” which refers to an intentional fall or reaction by a player to gain a foul call even though they had little or no physical contact with an opposing player. If referees observe two incidents of flopping from the same team, they will declare a technical foul, which gives one free throw and possession of the ball to the opponents.

For this season, teams can ask for a video instant replay only once during the game. Last season, they could ask for unlimited video reviews. But if the original call is reversed after a review, the team will be allowed an additional video replay.

Also, only the coach of the team can ask game officials for a timeout, and half-time periods will be reduced from 15 minutes to 12 minutes.

Before the new season, the KBL teams expected they would need to fill the void left by players who were selected to the Korean national team which is to compete in the FIBA Asia Championship in China from Sept. 23 to Oct. 3.

As the tournament gives a pass to the 2016 Summer Games in Rio de Janeiro to the winner, Korea will form a squad from the best players in the league. This means KBL teams will be without their best players during the event.

Anyang KGC will see two of its players - guard Park Chan-hee and forward Lee Jung-hyun ­- out for national team duty, the largest among KBL clubs.

The illegal gambling scandal has brought another headache for teams. The KBL on Tuesday announced that 11 active players who have been booked without detention for illegal gambling will not play in the league until the charges are resolved.

“As a member of the basketball community, we are sorry for the kind of things that happened and it’s true that basketball fever got cooled down because of that,” said the Promy coach Kim Young-man. “But all 10 teams will put our best efforts forward to play fun basketball to cheer up fans.”

However, with some players suspended and others absent due to national responsibilities the league will probably take some time to warm up.

The major change in the KBL season is about foreign players. Each of the 10 KBL clubs in July picked two foreigners via draft in Las Vegas. But under the new rule, one of the foreign players must be 1.93 meters (6 feet 4 inches) or less in height.

The KBL made this change to bring quick and technical foreign players into the guard position to spice up the court. This means Korean players will have a tough time defending them from the backcourt.

In a KBL Media Day event on Monday, local players were asked to name which foreign players would be the best. Egis’ Andre Emmett and the Orions’ Joe Jackson came out on top.

Both are under 1.93 meters tall. Emmett, a 32-year-old who previously played for the Memphis Grizzlies, is 1.91 meters tall, while Jackson, the youngest foreigner this season at 23, is the shortest foreigner at 1.80 meters.

Nine foreign veterans have already experienced the KBL, although most of them are wearing different uniforms from last season. Ricardo Ratliffe, the KBL Foreign Player of the Year last season with the Phoebus, was the first pick of the draft and will be wearing a Thunders uniform.

Pundits say that the key for each team will be the cohesion between foreigners and local players.

Since the league is starting a month earlier, rookies will be able to feature from the third round of the regular season. This season’s rookie draft will be held on Oct. 26 and those who are drafted can play on the pro court from Nov. 8.

Three teams will have new coaches this season. The Sonicboom has hired former Phoebus assistant coach Cho Dong-hyun as their new skipper. Cho, who played for the Sonicboom from 2009 to 2013, is the youngest coach this season at 39.

The Egis has promoted their interim coach Choo Seung-kyun to officially lead the club. Choo, 40, is the franchise legend for the Egis, as he played for 15 seasons before retiring in 2012.

KGC will be led this season by interim coach Kim Seung-gi after former coach Jeon Chang-jin, who signed with the club in April, decided to quit in July after becoming involved in the alleged match-fixing scandal. Kim served under Jeon for 10 years while he coached the Promy and Sonicboom.

The Orions are seen as the top contenders for the championship. The team, led by coach Choo Il-seung, won the Pro-Amateur Basketball Championship last month. This season they brought shooter Moon Tae-jong and two-time KBL top scorer Aaron Haynes, who will join existing star forwards Lee Seung-hyun and Kim Dong-wook.

The Orions have failed to reach the finals since their championship victory in the 2002-03 season. Since Choo took the helm in the 2011-12 season, they reached the six-team playoffs three times, but were always knocked out in the first round.

The Phoebus, who are looking for their fourth straight championship, are considered dark horses for the championship as they lost Ratliffe and Moon Tae-young to the Thunders.

“You can’t ignore the winning DNA of them,” said the Sonicboom coach Cho. “Teams that won the championships get stronger as they go through the season.”

The Egis are also the team to look out for. After finishing ninth last season, they signed point guard Chon Tae-poong, who is back to his former team after three years, as well as former Elephants forward and captain Ricardo Powell.

“The Egis’ foreign players are not tall, but they know how to play basketball,” said Knights coach Moon Kyung-eun. “If center Ha Seung-jin plays the season without injury, they can win the championship.”