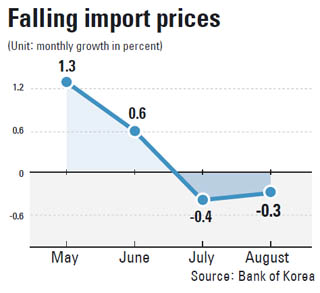 Export prices rose due to weakness in the won, while import prices declined on the back of the latest falls in oil prices, Bank of Korea data showed Thursday.

The export price index for August rose to 85.82, up 0.7 percent month-on-month, the data showed. However, this was down 1.5 percent from the same period a year earlier.

Price gains were led by machineries, transport equipment and textiles, which were all up by 3.1 percent. Falls in prices of coal and petrochemical exports were markedly steep, however, at negative 10.6 percent, data showed.

The import price index for August was down 0.3 percent to 81.4 month-on-month, and also down 13.6 percent year-on-year due to the latest weakening of crude oil prices.

Falls in import prices were led by minerals and petrochemical goods, which were down by 40 percent and 41.2 percent, respectively.

Gains were seen in agricultural goods, with meat and dairy products up 4.6 percent and fishery products up by 3 percent month-on-month.