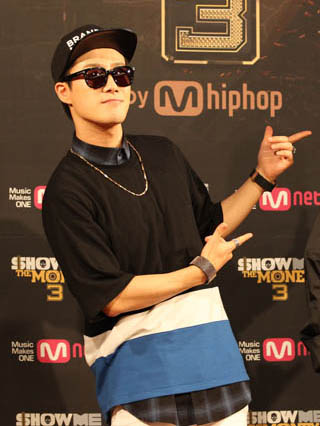 
Mnet’s hip-hop survival show “Show Me the Money 4” this year has given the public a chance to see many sides of rapper San E, known for his song from last year, “A Midsummer Night’s Sweetness.”

Even though he joined the show as a producer and judge and had a smooth start, he ended up being dissed by a novice rapper midway through the show, which ended last month.

It all started when he chose to advance a rapper from the same agency as him during the show, even when the rapper, Hanhae, forgot the lyrics. His reason for dropping the other contestant, Black Nut, was that he was not looking at the audience while rapping.

But San E took back his decision and decided to advance Black Nut after all. The audience, along with Black Nut, fiercely expressed their disapproval. The contestant heavily criticized the professional rapper, but San E did not fight back and admitted his misjudgment.

Despite the hiccup, San E said the program made him reflect on himself, and he is thankful for that. As the show ended its season, Ilgan Sports, an affiliate of the Korea JoongAng Daily, sat down with the rapper.

Q. It is hard to imagine “Show Me the Money 4” without you in it. What do you think about the show?

A. When we look back on hip-hop history in Korea later on, the show will never not be included. I somehow like the fact that I am part of history. Hip-hop is no longer only a fad but has become a type of music many people can enjoy.

Some said the program may have distorted the general hip-hop culture in Korea. What’s your stance?

I understand, but see this: There are musicians we didn’t know much about who rose to the surface, and thousands of high school students are applying to be on the show. Everyone can have a different opinion, and it would be boring if everyone thought the same. Criticism will help [the show] develop better.

What made you take back your decision on advancing Hanhae?

I felt uncomfortable. So did Verbal Jint. There are some standards we have and the results of other evaluations we did, and we started to feel that something wasn’t right. I knew that it would create controversy, but I couldn’t help but do it.

Black Nut dissed you big time on the program. How did you take it?

He was very honest. That didn’t make me feel irritated. After being criticized a lot, I talked with Verbal Jint, and we said this might become a rap legend.

Will you go on the next season of the show?

No way. I would not do it even if my mom begged me to do it. I think it would be better for more fun people to come out and create something new. I have learned a lot from the show.

What type of music do you want to do from now on?

For now, I think I may not be a favorable person among hip-hop musicians. I thought I had already proved that I [am serious about the music]. Then I realized that proving oneself should be done continuously, and it is not a one-time thing. My roots are in hip-hop and that’s how I began.

For the time being, I want to do some cheerful music that can be easily enjoyed by the general public. In the next song I release, I will say the things that are on my mind honestly. I’ll always do music that I want to do at that moment.