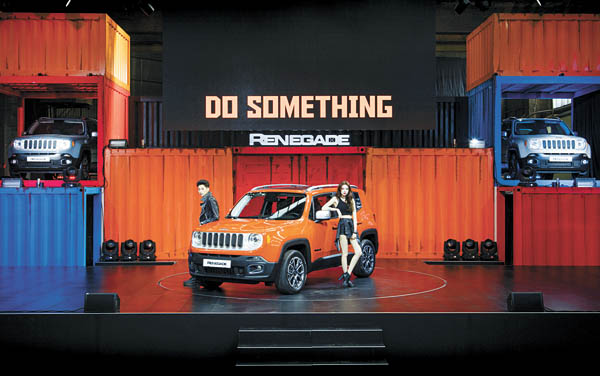 Models pose with the Renegade, Jeep’s first small SUV, during its launch event in Seoul on Thursday. Provided by FCA Korea

The small-size SUV market is particularly fierce in Korea, but that hasn’t stopped Jeep from entering the fray with its new Renegade.

At its launch event in Gangseo District, western Seoul, on Thursday, Fiat Chrysler Automobiles (FCA) said that Jeep’s first compact crossover had inherited the DNA of Jeep’s first model, the Willys MB, and a long-time favorite hit, the Wrangler. The all-new Renegade is Jeep’s first car produced at the Melfi plant in Italy and was the most popular SUV in Europe in June with 5,400 cars sold. In the United States, a total of 20,750 were sold between its launch in March and July. With the addition of the Renegade, Jeep’s SUV lineup now ranges from small to full-size, from the Renegade and Compass (compact) to the Cherokee (mid-size) and Grand Cherokee (full-size).

“The Renegade targets young consumers in their 30s that have a variety of lifestyles, but particularly those who participate in outdoor activities,” said FCA Korea CEO Pablo Rosso. “The Korean small-size SUV market is growing the fastest, and the Renegade is a true four-wheel drive SUV, unlike the Mini Countryman and Nissan Juke.”

The company picked the Mini Countryman SUV as its biggest rival. “Compared to the Countryman with similar level of equipment features, the price for the Renegade is about 6.7 million won [$5,660] lower, which is huge,” said the CEO Rosso.

The Renegade has provided a total of 70 convenience and safety features that aren’t offered in other brands’ small SUVs, including electronic stability control - which helps drivers maintain control of their vehicle during sharp turns - a lane departure warning function and a blind spot monitoring system.

The biggest concern for FCA Korea is whether it can match supply with consumer demand. The company initially planned to introduce the Renegade in July, but postponed the release after having trouble securing enough vehicles to launch in the country.

The company said it currently has 500 units for the Korean market this year.

“The Renegade has been a huge success around the world and that made it hard for us to acquire enough to sell,” said Eric Chung, the director of marketing and planning for FCA Korea. “We are consistently communicating with FCA to bring enough Renegades and aim to sell 200 units per month once the problem is resolved.”

However, the Korean automakers that have recently been losing many consumers to foreign brands are preparing a counterattack.

Kia Motors, the nation’s second-largest automaker, will start selling a revamped version of its Sportage SUV later this month, and Hyundai Motor is planning to discount its popular SUVs like the Santa Fe and Tucson.