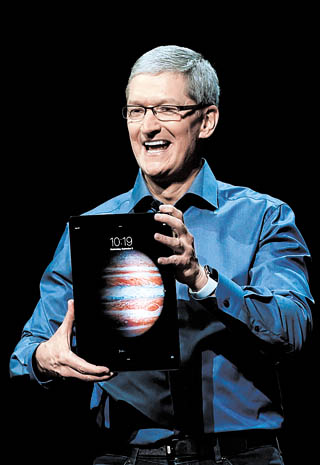 Apple on Wednesday unveiled an array of new devices alongside the iPhone 6s and 6s Plus, a clear signal that it wants to rely less on the highly popular and profitable smartphones.

The Samsung Electronics rival debuted the iPad Pro with the biggest-ever display for a tablet, its own version of a stylus called Apple Pencil and an upgraded TV set-top box at its annual showcase event.

The new iPhones, which Apple CEO Tim Cook described as “the most advanced smartphones in the world,” are equipped with a speedier processor and a 12-megapixel rear camera and 5-megapixel front-facing camera that best the previous iPhone models. A new feature called 3D Touch lets users make commands by pressing down harder or softer on the screen.

“While they may look familiar, we have changed everything about these new iPhones,” said Cook, who succeeded Steve Jobs as CEO in 2011. 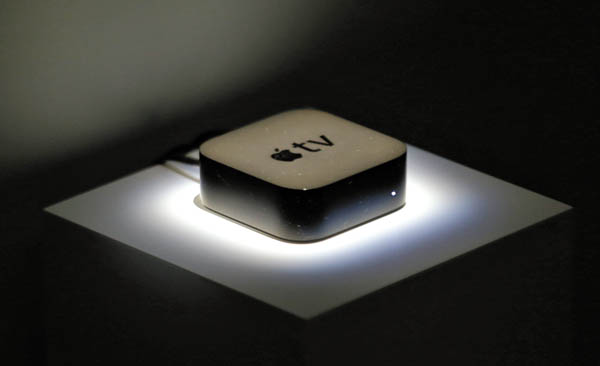 The phones now come in four colors - silver, gray, gold and rose gold - adding variety to the color options as Samsung Electronics has been doing with its Galaxy flagship phones.

And as usual, the latest Apple phones won’t be available in Korea for a while. The new iPhones will first be sold Sept. 25 in a select batch of countries, including the United States, China, Japan, Hong Kong and Singapore, with pre-orders starting Sept. 12.

Some 130 countries will have them in stores by the end of the year, Apple said. An Apple Korea spokeswoman could not be reached for comment as to when they would be sold in Korea.

The iPhone remains the most important product for Apple, accounting for more than 60 percent of its revenue last quarter. The company’s stock has come under pressure by questions about its long-term revenue prospects, particularly smartphone sales in China, a market it’s counting on for growth. Shares have fallen about 15 percent since July 21 when Apple reported lower-than-expected financial results.

Apple also unveiled a bigger member of its iPad family, further blurring the line between tablet and laptop. The device’s display is 12.9 inches. The new iPad Pro will cost $799 to $1,079, depending on memory, and goes on sale in November, though the schedule in Korea has yet to be confirmed.

Sales in the iPad unit fell 18 percent in the three months that ended in June, the sixth straight quarterly decline. The new product is geared toward business customers looking for an alternative to laptop computers - a market that Cook has pinpointed as iPad demand has slowed.

The iPad Pro has many characteristics of Microsoft’s Surface tablet, including an optional case that doubles as a keyboard that will cost $169.

Apple also introduced a stylus for the device that it calls Apple Pencil. The $99 device comes eight years after Steve Jobs famously said at the initial iPhone reveal, “Who wants a stylus? You have to get ‘em, put ‘em away. You lose them. Yuck.”

Four years after his death, the former CEO’s principles about stylus use and 3.5-inch screen have been blown out of the water as Apple marches on with constant upgrades to its product lineup.

Apple also highlighted new software for the Apple Watch, including several apps made by outside developers. Facebook is releasing its Messenger app for the smartwatch, and GoPro is making an app available that will work as a viewfinder for seeing what a person is filming with one of the company’s cameras. Another app, AirStrip, helps doctors monitor a patient’s vital signs. An updated version of the operating system for the watch will be available Sept. 16.

The new Apple TV set-top box, the first overhaul of the product since 2012, will cost $149 to $199 and will be available in late October. The device has a new touch-enabled remote control and integrates Siri voice-activated commands, letting people search for a movie or show by saying a title, genre or an actor’s name. The new search function includes the ability to look for programs across streaming apps, including Netflix, HBO, Showtime and Apple’s iTunes - all unavailable in Korea - with more services to come later.