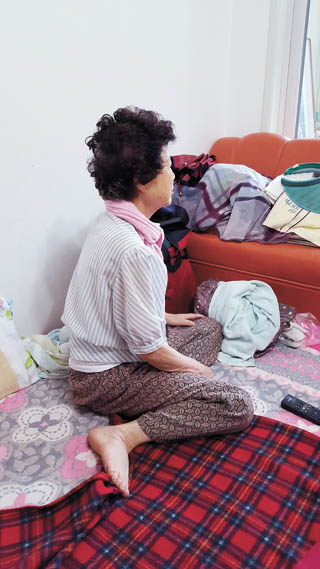 Kim Bok-seon has avoided media appearances since receiving criticism from her neighbors and friends for speaking out about her past being forced into sexual slavery by the Japanese military during World War II. She shows off her most prized possession. By Yun Jung-min

The JoongAng Ilbo collected the oral histories of 13 survivors of sexual slavery during World War II over the past month. As all the women are in their 80s and 90s, this may be their last record of their personal stories. The series marks the 70th anniversary of Korean liberation from colonial rule and the JoongAng Ilbo’s 50th anniversary. This is the ninth in the series.

Kim Bok-seon was just 12 years old, an elementary school student, when she was abducted to Japan and forced to serve in a wartime military brothel.

But whenever she is asked about her experiences there, her answer is always the same. “I don’t remember well.”

When the JoongAng Ilbo visited Kim at her home in her native Changwon, South Gyeongsang, on Aug. 12, she was leaning still against the wall as she watched the news on television. 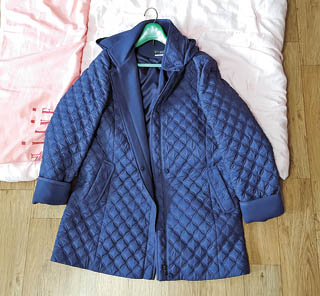 A quilted navy winter coat that was given to her by the Korean government, on Aug. 12, at her home in Changwon, South Gyeongsang. By Yun Jung-min

Japanese Prime Minister Shinzo Abe came on the screen, and the 83-year-old tilted her head.

“Whenever any story about Abe comes on, I turn off the TV,” she says. “I really don’t like him. The prime ministers before him were not this extreme, but this man is different. He should listen to us comfort women victims a little bit.”

Since the start of his term, Abe has made a slew of controversial remarks regarding Japan’s wartime aggressions, often denying that thousands of young women and girls were lured or forcibly recruited into Japanese military brothels throughout Asia.

This is despite scholarly estimates that up to 200,000 women were forced into sexual slavery by the Imperial Japanese Army during its colonial rule (1910-45) over the Korean Peninsula, a fact that is recognized by the United Nations and the international community.

Kim claims that she doesn’t remember her experiences well, in part because she was very young then, but also because she does not want to vocalize her nightmarish past as a “comfort woman,” as military sex slaves were euphemistically called.

“It’s something that cannot be expressed in words...” Kim trails off. “Life was hard for our people [during colonial rule]; we raised bean sprouts and ate them with rice, but the police and the Japanese would come and kick over our rice steamers. Japan cannot see straight. As a comfort woman, I was dragged here and there, and it was very agonizing, not knowing exactly where I was.”

She does, however, vividly recall the terror of the U.S. atomic bombing of Hiroshima in August 1945.

“The bomb dropped on Hiroshima, and we were located in the vicinity of where the bomb fell. So we packed our blankets and everything and hid in a ditch to avoid being bombed. I remember that clearly.”

After Korea was liberated, Kim made it back home and belatedly returned to middle school - a rare feat in those days, she recalls with pride.

Later on, she married and had children.

At a time when the nation was hungry, Kim did everything she could to feed her family. She worked nonstop, first selling wooden bowls then later apparel. Her children grew up, married and bore her grandchildren, and she got a small, cozy home of her own.

But some of her deepest scars came close to home.

In 1992, Kim was officially registered as a survivor of wartime sexual slavery after the government confirmed with her elementary school that she had been forcefully recruited.

Afterward, she testified once on television broadcast about her past as a comfort woman. But due to the strong backlash from the people around her after she spoke, she vowed never to discuss her past again, and has even avoided being photographed.

“At the time, the grandmothers in the neighborhood pointed at me and said, ‘That granny’s house must have been so poor back then to have been dragged away to such a place.’

“My middle school colleagues still live here in this neighborhood, and even the ones who were once my close friends have said such things. So whenever I go to an event, I never have my photograph taken or speak [of the past.]”

Rather than being able to speak of her experiences openly and without shame, Kim instead has lived as though she were the offender. She is afraid of societal judgement and worries it may harm her children.

But it was other survivors who provided her solace.

Over the past several years, Kim has formed friendships with other victims in neighboring regions and has even gone on trips with them.

To ward off dementia and keep active, she also tries to go out often and meet with people. She also consistently attends singing classes.

Her most valuable possession is a hand-picked quilted navy overcoat she received from the Ministry of Gender Equality and Family.

“I always went around selling clothes to other people, but this is something I went to the department store and chose myself. It is a fine coat, and I love it to pieces, so I wore it frequently last winter. I’m not sick yet, so I need to go out often.”