Painting of U.S. envoy’s assault is taken down

Painting of U.S. envoy’s assault is taken down 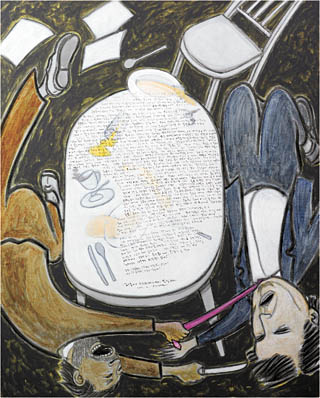 The painting in question [SeMA]

The Seoul Metropolitan Government will officially express its regret to U.S. Ambassador Mark Lippert over a painting displayed at the city-run museum that depicts the March 5 assault on the top envoy by radical activist Kim Ki-jong, city officials said.

The painting, titled “Kim Ki-jong’s Slashing,” was removed from display Tuesday at a branch of the Seoul Museum of Art (SeMA) in southwestern Seoul.

The move came after several media outlets reported that the painting, created by leftist artist Hong Sung-dam, appeared to support the attack.

The painting was part of the Artist Guild Art Fair, which the museum organized as an alternative art fair, where artists “alienated from commercial galleries and collectors” can sell their works directly to collectors - not through galleries.

“The participating 24 artists and their 120 works were selected by an outside director, Hong Kyoung-han,” SeMA explained in a statement on Tuesday.

“Because the painting has become a political issue - which is not the intention of the exhibition - we ultimately decided to remove it from display,” the museum quoted the curator as saying.

The painting depicts Kim attacking Lippert with a knife and contains a long text.

In the text, Kim wrote that South Korea’s problems, including historical disputes with Japan and its conflicts with North Korea, originate from the diplomatic policies taken by the United States directly after World War II.

“I have felt despair about these problems for a long time. However, I’ve kept my mouth shut about the despair. On the other hand, Kim Ki-jong expressed it with a knife, though it was just a fruit knife,” it reads.

Another one of Hong’s paintings for the 2014 Gwangju Biennale also stirred controversy last year. The piece criticized the government over the Sewol ferry disaster on April 16, 2014, while depicting President Park Geun-hye as a scarecrow.

The Gwangju city government, which sponsors the special show, pressed for the painting to be excluded, and after discussion, the Biennale Foundation decided to delay its display. The decision brought strong protests from the artist and his supporters, and prompted the chief curator of the special exhibition, Youn Bummo, to resign over censorship concerns.

However, Youn, an art critic and professor at Gachon University, was more critical this time about Hong’s work. “Unlike the piece for the Gwangju Biennale, violence is involved in this painting,” Youn said. “In that case, the painting should have been more symbolic. The meaning can be misconstrued as the artist supporting terrorism, although the artist is said to deny this.”

“SeMA should have been more careful in exhibiting the painting,” he added. “But if a museum hangs a painting once, it should take charge of it. So I also regret that the museum decided to remove Hong’s painting.”