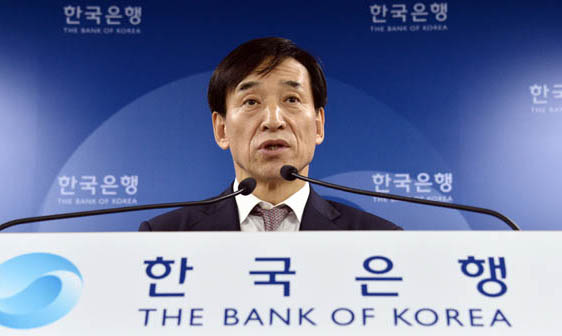 The Bank of Korea (BOK) kept the base interest rate unchanged at a record low of 1.5 percent on Friday as the central bank awaits a monetary policy shift by the U.S. Federal Reserve amid slowing growth of exports from Asia’s fourth-largest economy.

The decision to hold the rate was reached unanimously.

“The committee has noted a gradual pickup of the economy around domestic consumption and investments, rising uncertainties with the U.S. interest rate hike and household debt growth in reaching the decision,” said Lee Ju-yeol, BOK governor, during a press conference held right after a committee meeting.

“We think our current monetary policy is expansionary enough to support economic recovery,” Lee said, adding that he “[did] not think Korea’s economic growth will slow to near 2 percent.”

Financial markets had widely expected a rate hold in September, but a number of banks - mostly foreign including Australia and New Zealand Banking Group - had speculated a rate cut might be possible this week after weak exports data last week.

Expectations of a rate cut within this year is growing following weak export data that showed Korea’s August exports fell sharply, putting pressure on the central bank to help prop up the economy. Korea saw its exports drop 14.7 percent in August, the biggest fall since 2009, while industrial output unexpectedly declined compared with July.

While admitting that the country’s exports have slowed more steeply than the central bank had forecast, Lee contended that the Korean economy “has not veered significantly off the course we forecast in July.”

Lee said that if and when a number of risk factors come together - such as a further slowing of Chinese growth, sharper falls in commodities prices and the U.S. rate hike - “emerging market economies could fall into danger and this could spread [to Korea].

“We have taken such possibilities into account and set up measures to counter negative effects under various scenarios,” he said.

“The Bank of Korea probably wants to see how the U.S. rate hike and Chinese economy pan out,” said Seo Dae-il, an analyst at Daewoo Securities. “They are not the kind of risks you can prepare for pre-emptively.”

The U.S. Federal Reserve is scheduled to announce its policy decision on September 17.

“The export slowdown is more serious than the Bank of Korea expected, and we think this will prompt the central bank to go with another rate cut within the fourth quarter,” Seo said.

Four rate cuts by the BOK since August 2014 have proved to have little effect in boosting growth, with the economy expanding just 0.3 percent during the second quarter and inflation staying below 1 percent so far this year.

One of the key factors holding the BOK back is Korea’s rapidly escalating household debt, which hit a record 1,130.5 trillion won at the end of June.